LU women in dogfight of a playoff race, raise eyebrows with win over TO 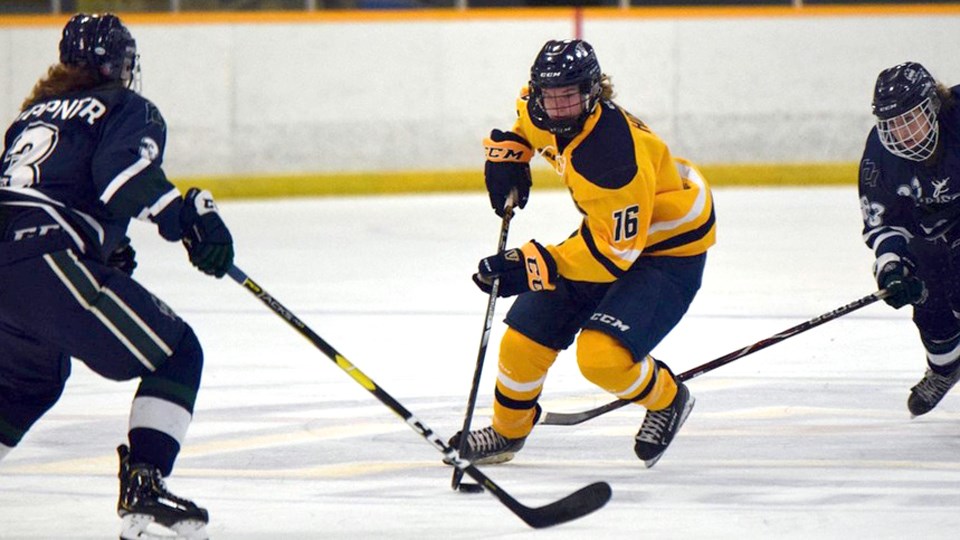 The race for the playoffs in the 13-team OUA (Ontario University Athletics) Women's Hockey loop is looking to be an absolute dogfight.

Thankfully for head coach Stacey Colarossi and the Laurentian Voyageurs, her team has shown the ability to take a bite out of the competition, all while improving nicely this year on their knack for picking up the wins.

The University of Toronto Blues made the trek north this past weekend, riding a seven-game winning streak to open the 2019-2020 campaign. While a 2-1 loss to the Nipissing Lakers was not all that shocking — Toronto and Nipissing are two of the three teams tied for first place in the standings following play on the weekend — a second straight 2-1 loss, to Laurentian, in a shootout, likely raised a few eyebrows.

Gabrielle De Serres (Toronto) and Karissa Hoskin (LU) traded second period goals, the only scoring in the contest through 60 minutes of regulation time play, as well as a seven-minute three-on-three overtime session.

And while Adrianna Noble did manage to fool Laurentian netminder Shanna Dolighan with the first Toronto shot of the game-ending skills competition, Morgan McCann and Regan Toltesi did likewise at the other end of the ice, giving the homeside the win.

It was a nice bounce-back effort for both Dolighan and her team, as the locals were bounced 6-2 by the Ryerson Rams on Friday, the visitors suddenly playing quite well, winners of four straight, after a very slow start to the season for a veteran crew.

As for Laurentian, their record now stands at 4-4-0-1, good for 13 points, two back of the Queen's Gaels, and two ahead of the Brock Badgers.

"I haven't been completely pleased with our inconsistency from period to period, but consistency, even at the NHL level, is one of the hardest things to master as a group," said Colarossi.

"In regards to where we are sitting, the goal was to have at least a couple more points, whether that be from Waterloo or Western. But that being said, in the past, we were competitive with upper tier teams, still losing the game, but being very competitive, but then we would play bottom tier teams and lose.”

Regulation victories (worth three points each) over the likes of the Laurier Hawks (2-0), Windsor Lancers (3-0) and the Brock Badgers (1-0) have been critical, as the Voyageurs prepare to close out their pre-Christmas schedule, hosting Queen's and the Ontario Tech Ridgebacks this weekend, and closing off with a road match against the York Lions next week.

"For myself, where we have started and where we have come to, we've really grown as a group," said Colarossi. "We're fast, we're playing cohesive hockey, they're getting along off the ice - there are a lot of great positives."

"We taught what we've need to teach in the first month and a half, so now we're into repetition, so that they get comfortable," she added. "We also re-assessed recently where we were at. Our two big focal points were to move our feet consistently, through pucks, on both receiving and giving, and also to play better transition hockey."

Despite a tough outing against Ryerson, Dolighan continues to rank among the top goaltenders in the OUA, sitting first in total saves (232), second in save percentage (.951) and fifth in goals against average (1.70).

Natanièle Lamoureux and Jaimee MacDonald scored in a losing cause for LU on Friday, while Kirkland Lake native and 2018-2019 OUA Rookie of the Year Erika Crouse racked a goal and an assist for Ryerson.

Still with northern talent, former Sudbury Lady Wolves forward Lauren Hancock saw action for the U of T Blues on Saturday. Fresh off a silver medal performance at the 2019 Esso Cup, the Garson native has appeared in three games so far in her freshman campaign, still looking to collect the first point of her OUA career.