The last thing Mike McCue was going to do was wait for it to happen. From a young age, McCue has been obsessed with the sport of squash.
Apr 25, 2012 5:45 PM By: Scott Haddow 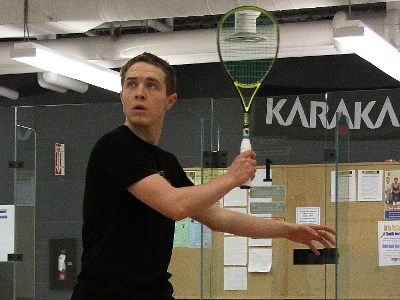 Greater Sudbury’s Mike McCue has made the jump to the Professional Squash Association tour and is making his way up the rankings ladder. Photo by Scott Haddow

The last thing Mike McCue was going to do was wait for it to happen. From a young age, McCue has been obsessed with the sport of squash. After ditching all other sports and putting all his personal stakes in squash at the age of 13, McCue began to carve out his niche on courts in Sudbury and around the province.

Competing in the Greater Sudbury and Northern Ontario squash circuit was fine for the first few years, but eventually McCue’s desire and passion made him want more. A lot more.

Once he wrapped up his junior career in 2011, McCue, 19, needed to make a decision: Go for his dream of playing pro squash or give up on it. There was no way he was going to throw away the last six years of his life without taking his shot at being a pro.

So, McCue packed his bags and moved to Toronto to become a member of the National Squash Academy and train under Canadian squash icons such as Jonathon Power and Gary Waite for the 2011-12 season. McCue turned professional and has been trying to carve out a new niche on the Professional Squash Association tour.

It has been a challenging move, and one that is giving McCue all he can handle.

“The realities of pro, especially at the lower levels, are harsh,” McCue said. “If you lose first round, you make no money and get no rankings points. So a trip to Malaysia or Argentina can essentially amount to little more than a costly vacation if you lose early.”

The lessons are never cheap or easy. For every inch McCue climbs up the proverbial improvement ladder, he sacrifices almost all his free time to train and prepare for matches against wily pros. At the start of April, McCue was ranked 234th in the world rankings. He is working at chopping his number down to 150th overall before the season ends. The only way he can do it is by competing in more tournaments and winning more matches — easier said than done.

“The PSA tour is pretty tough and cutthroat when you are starting out,” the 19-year-old Lockerby graduate said. “It’s hard to get into tournaments, and then even tougher to get good wins because everyone is so desperate to move up the rankings.”

Despite the challenges and sometimes cruel and unforgiving nature of the pro squash scene, McCue said the positives far outweigh any negatives, and looks forward to keep dedicating his time toward his passion and purpose in life right now.

At the end of each day, when he is exhausted and can give no more, McCue can only smile because he knows he’s doing the right thing.

“Playing pro is something I never really considered when I was younger because it seemed a bit impractical, and I also didn’t think I would be good enough,” he said. “I am so appreciative of the opportunity now, and it’s pretty amazing to get up every day and head into the squash club instead of school or a job — for now.”

McCue has opened eyes in the pro tour and at the academy. He puts in two training sessions each day at the academy for a total of six hours. His work ethic, determination and willingness to learn has endeared him to the coaching staff at the national academy.

“He is fitter, stronger, more disciplined and has begun to impose himself physically and mentally on his opponents, instead of waiting for his opponents to impose their games on him,” said academy coach Jamie Nicholls.

Nicholls sees a bright future ahead for McCue because he has the right approach to the pro game and has the desire to improve regardless of circumstances he faces.
“At the center of any great athlete, you must truly love the game and love the thrill of competing,” Nicholls said. “Mike embodies this and because of this is able to take the wins and the losses as equal learning experiences. He will never back down from a challenge and will never give up in a match — two huge assets as he competes on the pro tour.

“Mike will be a slow and steady climber. He has unlimited potential and is now targeting the Top 100 in the world, which could be achieved in the next two years. From there, the Top 50 will take another two to three years.”

McCue is looking forward to the future to see how high he can climb.

“I love how the game is a complete meritocracy. It doesn’t matter where you’re from, who your dad is, what connections you have or what team you play for,” he said. “On the court, it’s two people, and whoever plays better squash will win.

“Nothing outside the four walls matters when the match starts.”