Mosquito Shamrocks putting it all together on the diamond this summer 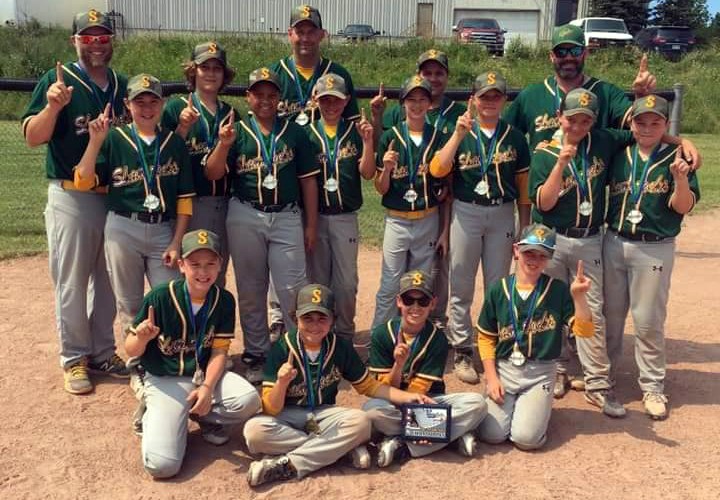 The Major Mosquito Shamrocks were in Vaughan earlier this month for the annual Select Ontario Baseball Association tournament. The team dominated, going undefeated to take the final game 9-4 against the Annette Black team from Toronto. (Facebook.com / SudburyMinorBaseball)

With both their hitting and pitching coming along more quickly than expected, the Sudbury Major Mosquito Shamrocks will be in a position to take another look at participation in OBA (Ontario Baseball Association) tournaments come next summer.

In the meantime, head coach Craig Thompson and his staff will do their very best to continue developing the young local group of talent than ran roughshod through a season opening SOBA (Select Ontario Baseball Association) tournament in Vaughan early this month.

In capturing their first four games with ease, the Mosquito Shamrocks cruised past Thornhill (27-0), Brampton Minor (16-1) and Vaughan Major (20-0) in round robin play, as well as Annette Red (12-0) in their semi-final match.

The championship tilt proved to be a little more competitive, as the Shamrocks defeated Annette Black 9-4, with Cavan Clarke picking up the win on the mound, pitching four innings before hitting his maximum 70-pitch count.

"I am trying to throw the ball hard, and be accurate," said the Grade 6 student at R.L. Beattie Elementary School. "When I change my speed, I don't have the same release point. And then when I try and throw hard again, my release point is way off. Sometimes, I can get a high fastball in there and they swing at that."

While the Shamrocks can clearly pound the ball, plating no less than 84 runs over the course of five games, this is a crew that also takes a great deal of pride for their work on the mound.

"Our pitching is really good," said Clarke. "Most of the other teams don't have as strong pitchers as we do."

And when opponents do make contact, the Mosquito Shamrocks are pretty well-schooled on limiting the errors.

"I'm an outfielder, usually centre field," stated 11-year-old Christopher St. Germain. "I'm fast, I have good footwork, I can track down the ball and I can throw it to the cut-off.

"I almost did a diving catch in Vaughan on the weekend," added St. Germain. "It just tipped off my glove and then went back a little bit."

Bringing together the three key aspects of baseball - hitting, pitching, defence - was exactly the game plan that Craig Thompson and his staff of Kyle Gutscher, Brendan Clarke and Jeff Nowoselsky envisioned as they welcomed six new players to the crew that graduated from the Rookie Ball ranks last year.

"We spend a lot of time on contact, trying to make sure our kids can make contact," said Thompson. "I want the kids to be aggressive, put the bat on the ball, make the other team play defence. We put the ball in play a lot, and that puts a lot of pressure on the other team's defence.

"We worked a lot of the fundamentals in the winter time, basic fielding skills," he added. "Once we got outside, we started to work more on double plays, getting the lead runner, making sure of getting an out. We will give up runs for outs, all the time, just to stop the big inning.

"I honestly didn't think we were quite ready for OBA this year, with our pitching. But seeing now how we have progressed, we probably could have played. I have 12 pitchers, on this team - almost everyone pitches. Not everyone will pitch in every tournament, but everyone can pitch."

Sports Hall of Famer Jack Porter passes away
Feb 27, 2020 2:45 PM
Comments
We welcome your feedback and encourage you to share your thoughts on this story. We ask that you be respectful of others and their points of view, refrain from personal attacks and stay on topic. To learn about our commenting policies and how we moderate, please read our Community Guidelines.

'We feel like we now belong to this great nation': Canada's newest citizens sworn in (video)
0