Running across North America for the health of it

Ed and Gaye Chicoine returned to a place they used to call home on the weekend, and they brought their six children with them.
Jul 4, 2011 7:05 PM By: Laurel Myers 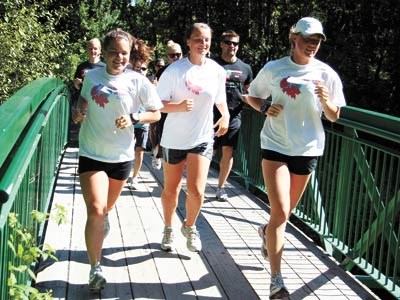 Dayna, Whitney and Karina Chicoine led a pack of about 50 runners, walkers and cyclists on a 5 km tour through Rotary Park. The event was part of the Chicoine family’s Marathon of Health — a run that will take them across Canada and the United States on a mission to promote health and wellness. Photo by Laurel Myers

Ed and Gaye Chicoine returned to a place they used to call home on the weekend, and they brought their six children with them. Sudbury was one of hundreds of stops on the family’s journey across North America — by foot — to inspire Canadians and Americans to live healthier, more active lives and raise funds for kids’ fitness.

While running across North America, the family of eight, who now live in Wakefield, Que., is visiting local communities to inspire people to make positive transformations in their lives through fitness and nutrition. Their goal is to raise $5 million for organizations that promote those values in children, including KidSport Canada, Right to Play and Get America Fit.

“These organizations are focused on improving kids health and fitness around the world,” the family’s Facebook page stated. “We believe every child should be given the chance to live a healthy and happy life right from the beginning.”

Now that it’s moving and rolling, it’s really a fantastic experience working together with everyone.

On July 3, the Chicoines — Ed and Gaye both grew up in Chelmsford — brought their message of good health to their extended family and old friends as they led a five-km run, walk or bike through Rotary Park.

“The journey is for raising health awareness,” Gaye said. “In our society, we’re noticing that children are not as active as they could be. Their health is declining greatly and there is a lot of childhood obesity ... these children need to get active.”

She said the diseases that generally happen later in life are now hitting children in their teens.

“It’s mostly because of their lifestyle choice and not being active enough,” the mother said. “If everybody just changed their lifestyle with one or two healthier habits, it would make a big affect on the costing of our health care system.”

Running across Canada has been on Ed’s bucket list for the last 30 years, after he witnessed Terry Fox running down Hwy. 69 in 1980.

“I thought way back then it would be cool,” he said. “Thirty-one years later, I thought, if I’m going to run across Canada, it’s time for me to do it now.”

And he had full intentions of doing it on his own. But his children wouldn’t have it.

“All the kids said there was no way they were going to let me run across Canada without them joining me. All of a sudden it took on a whole new life and became quite a huge project involving the whole family.”

Jake Chicoine is the second youngest in the family. He said he was the first of the six siblings to volunteer to accompany their father on the journey.

“He was asking all of us to come out for a month at a time to help him run across Canada,” the 19-year-old said. “I was actually the first one to say, ‘Well, if you’re going to run across Canada, I want to go, too.’”

He said his siblings, who range in age from 17 to 26, quickly followed his lead.

“Everyone came in and said the same thing. Before we knew it, we were all doing it.”

He said his family has always been physically active. In fact, Jake had completed a number of half marathons and 30-km races prior to getting involved. But he said running up to 21 kilometres, day after day, has been a test of his physical abilities.

“I’m a pretty avid runner ... but I never do it, day after day, like this, so it’s been quite the challenge,” he said.

While Gaye is adamant about the cause the family set forth to promote, she admitted she wasn’t too keen on the idea when her husband first brought it up.

“I thought, ‘We’re turning our life upside-down,’” she said. “Now that it’s moving and rolling, it’s really a fantastic experience working together with everyone.”

With eight adults calling an RV home, Gaye said it can be a little trying at times.

“It’s such a small confined space, but ... we learned to get along.”

The Chicoines left from Vancouver May 8 and have been travelling anywhere from 90 to 140 kilometres every day.

The six children and their father have taken a relay approach to covering the distance, with each of them running roughly a half marathon every day.

Gaye, who said she is not a runner, cycles beside her family as road support, ensuring they have ample water and energy supplies.

She said they are expecting to have completed their trek across Canada by mid-September and the United States leg of the journey by next February.

For more information about the Marathon of Health, or to follow or support the Chicoines on their journey, visit
marathonofhealth.com.