By Max Leighton Somewhere on a highway outside of North Bay a man runs alone, pushing a child’s stroller containing the few possessions he has the strength to bring with him.
Aug 9, 2010 6:53 PM By: Guest Columnist 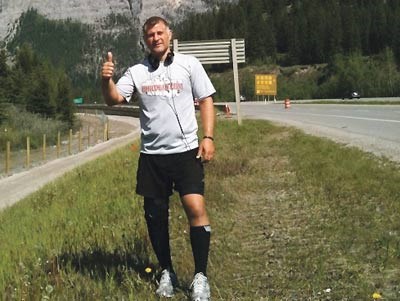 Runner David Nash passed through Sudbury recently as part his 'Cross Canada Run for the Children,' a nearly 7,300 km trek in support of Canadian family law reform and the adoption of Bill C422. Supplied photo

Somewhere on a highway outside of North Bay a man runs alone, pushing a child’s stroller containing the few possessions he has the strength to bring with him.

His name is David Nash, a former professional boxer, turned family justice crusader. He is entering the final leg of his “Cross Canada Run for the Children,” a nearly 7,300 km trek from Victoria B.C. to Cape Spear, Nfld., in support of Canadian family law reform and the adoption of Bill C422, a proposition to amend the divorce act.

His run, which began at the Terry Fox memorial in Victoria B.C. on June 1, brought him through Sudbury last week.

For Nash, family justice is an issue close to home. He recently settled a four-year legal dispute with his ex-wife over the custody of their son, and since then has spent much of his time campaigning for Canadian family law reform.

“Most Canadians don’t know how bad the system is until they go through it,” he said.

“When it comes to tax time, this government likes to remind us that we are first class citizens, but when we want our parental rights recognized, we are third class all the way.”

He believes his views are shared by many other Canadians. Setting out with little money and no sponsorship, Nash has often had to rely on the generosity of complete strangers, many of whom have shared his experiences with family law.

“People have been incredibly supportive of me,” he said.

“They provide vehicles to help me carry my gear, often they give me food or a place to stay. These are people who have had their lives completely turned on end by our justice system and they want the word out.”

The journey has not been easy, even with this support. A former light heavyweight and Eastern Canadian champion, he admits that this run has been among his greatest physical challenges. Nash currently runs about 64 km, or one and a half “marathons” per day, having already passed through some of this country’s most challenging terrain.

“My knees are taking a beating,” he said. “In training, I had developed some arthritic pain and it is starting to get worse as the days go on.”

Despite the difficulty, he said he remains hopeful that his message will be heard. “This run has given me a platform to speak from,” he said. “But my real work will continue after all this is done.”

This month he is being interviewed for an upcoming documentary on equal parenting called “Big Bad Dad” and he plans to write a book about the experiences of parents and children in the Canadian family justice system sometime in the near future.

But nearing the home stretch, he has simpler ambitions in mind. Recently remarried, Nash said he is looking forward to reuniting with a wife and children he has not seen in more than two months.

“This is the longest I have ever been away from them,” he said. “The first thing I am going to do when I get home is give my kids a big hug, then I think I am going to sit down and have a home cooked meal with my family.”

To keep up with David Nash as he completes his cross Canada journey visit www.crosscanadarun4thechildren.com.