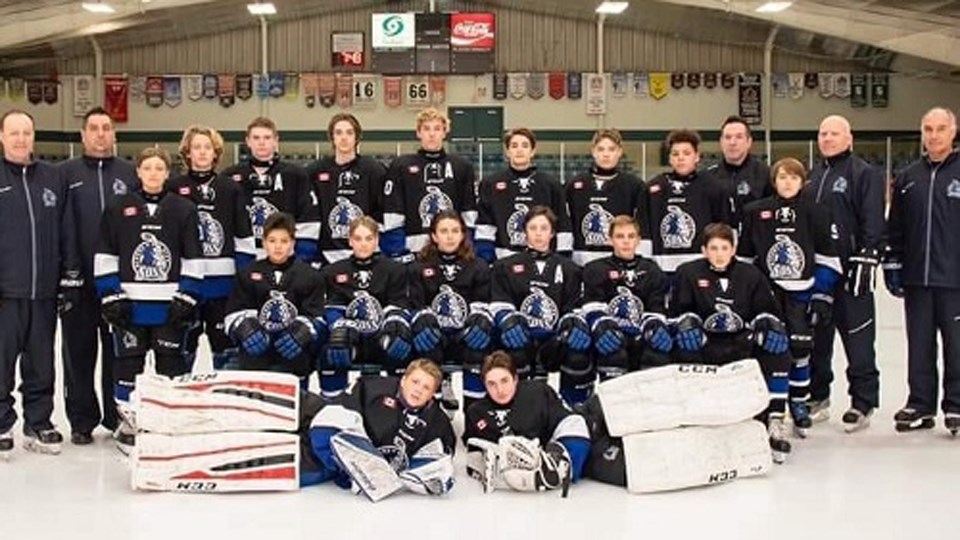 The Nickel City Minor Bantam "AAA" Sons recently enjoyed one of those magical tournament runs that all competitive squads strive to achieve at least once, each and every season.

Winning five of their first six games, the locals advanced through to the final of the 16-team Great Lakes Cup in Stratford, before settling for silver in their best showing on the road this year.

The Minor Bantam "AAA" Sons started strong, winning a pair of games convincingly on Friday, 5-1 over the Cambridge Hawks, and 4-1 over the Lambton Jr Sting. Nolan Newton scored twice in game one, joined on the scoresheet by Yves Doiron, Ethan Morris and Caden Dubreuil, with Doiron adding another pair of tallies in the evening affair.

Ethan Morris and Aleksander Duguay added one goal each, versus the Sting, before the Sons offense dried up in game three, the team blanked 3-0 by the host Huron Perth Lakers.

The young lads quickly brushed aside that setback, recording another 4-1 win to close out pool play, this victory coming against the Sun County Panthers as Doiron (2), Morris and Jacob Hayes found the back of the net for the locals.

Safely through to the quarter-finals, the Sons were not about to substantially change their M.O., eliminating the Oshawa Generals by a final score of - you guessed it - 4-1.

Newton, Duguay and Doiron were all back in the limelight, with Devan Madore burying his first of the weekend, the Sons now through to the Sunday final four. An all-around team effort produced a 3-0 semi-final triumph over the North Central Predators, as Aleksander Duguay, Yves Doiron and Jacob Leduc helped mount the attack that would allow goaltender Aaron Wright to do his thing at the other end of the rink, registering the shutout.

Unfortunately, this would mark the end of the string of success, as Nickel City fell 4-0 to the Whitby Wildcats in the gold medal affair, still a great showing in the eyes of the team's coaching staff.

"I liked the way that, as a group, they really came together and worked for each other," said Tim Stortini, the man who was also behind the bench when the Major Peewee "AAA" Sons qualified for the all-Ontario championships last April.

"They really realized that it's a team concept and really progressed, from that point of view. That was good to see."

Perhaps the most interesting aspect of returning with this particular group of talent, for Stortini and company, lies in the introduction of body checking as the boys kicked off play at the minor bantam level last August.

"We're now entering a situation where we have the body contact scenario, and that being part of the game," said Stortini. "It was obvious that the players had to not necessarily get bigger, but stronger. By that, I mean their core strength, their overall strength. It was something that they worked on over the summer and displayed a willingness to do the kind of things that were necessary."

So equipped, the team now needed some direction, some guidelines about how to properly incorporate this extra element of physicality into their games.

"The biggest thing to teach them was not to take themselves out of the play just because they wanted to have that big hit," said Stortini. "They needed to realize the importance of staying within the parameters of the play."

"Sometimes getting a stick on puck is just as important as taking the man," he continued. "We need them to realize there's a time and place to take the man. It's come along nicely, especially since Christmas."

With a two-game sweep of the Soo Jr Greyhounds this past weekend, the Nickel City Minor Bantam "AAA" Sons have secured first place in the NOHL, with Sault Ste. Marie and North Bay set to face-off in a semi-final series later this month, the winner moving on to face the Sons.

Ironically, the Trappers also came through with a solid showing at the Great Lakes Cup, posting a 2-0-2 mark in pool play, before being sent packing by the Whitby Wildcats in a hard fought quarter-final battle (3-2).