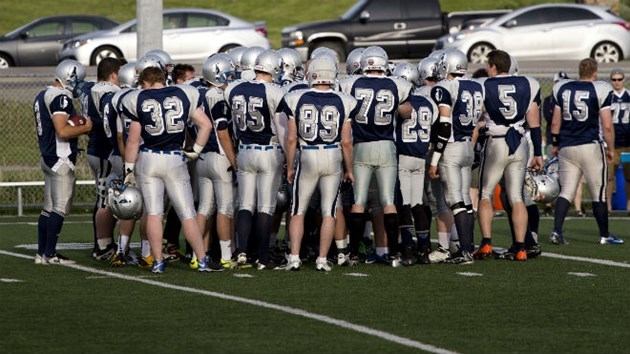 The Spartans and JV Spartans will host a double header at home on the James Jerome Field this Saturday with the Spartans facing off against the Ottawa Sooners in their last regular season game. (File)

The Spartans and JV Spartans will host a double header at home on the James Jerome Field this Saturday with the Spartans facing off against the Ottawa Sooners in their last regular season game.

The JV Spartans will be playing a quarter-final playoff match against the Orangeville Outlaws.

The Spartans currently lead the NFC West and are in third overall in the NFC. Looking to hold those positions going into the playoffs, a win against the Sooners would cement their position in leading the West and could bump them into second overall.

Coming off a tough loss against the GTA All Stars, the Spartans are looking to get back in the win column.

The JV Spartans are in a similar position in the OPFL; they finished first in the North Division and second overall, which led to their quarterfinal opponent being the Orangeville Outlaws. The JV team was supposed to play over the weekend, but their opponent, the Orangeville Outlaws, could not field a team, which meant they were forced to forfeit the game.

The Outlaws finished the season 3-5, with one of the losses being their forfeit against the Spartans.

The JV game kicks off at 4 p.m. to start the action, followed by the Spartans, who will take over the field at 7 p.m. The games will take place rain or shine and tickets for the games will be available at the gate for $10 for both the JV and the Spartans games.

Saturday's Spartans games are sponsored by Shoeless Joes Sports Grill they will be on site handing out coupons throughout the day. Fans can also visit the Dellelce Family hospital tent during both games to enjoy ice-cold Molson products.

Don’t miss out and be a part of the JV Spartans inaugural success and first ever playoff run and be sure to watch as the Spartans look to head to the playoffs as well.