Spirit take their revenge against the Sudbury Wolves 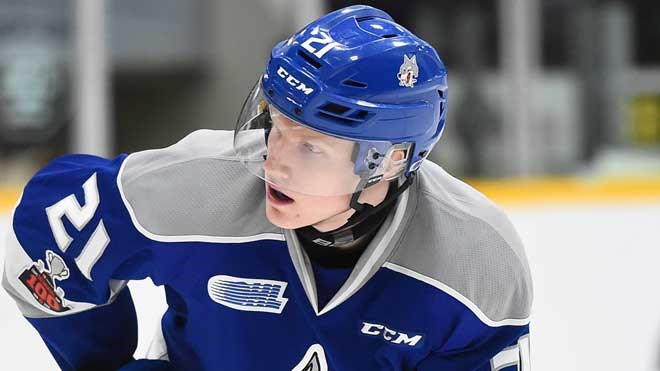 Five months after defeating the Saginaw Spirit at their hometown Michigan Dow Event Centre, the Sudbury Wolves have fallen to the same fate.

Sudbury Wolves' Nolan Hutcheson was named the second star of the game, for among other things, delivering two goals that evening.

Saginaw claimed the first period by delivering four goals within an 11-minute span, giving them a strong lead to carry into the second period.

Arrow-straight shooting by Saginaw put them up four after the first 20 minutes, with shots on goal an even 6-6 from either side of the ice.

The Wolves took a run of their own five minutes later, starting with Jack Thompson's 13th goal of the season assisted by Brad Chenier and David Levin. Hutcheson scored his first of the evening a few seconds later, with help from Macauley Carson and Blake Murray, to make it a 5-2 game.

Carson returned to the net to deliver one of his own at 16:20, with assists from Owen Robinson and Kalle Loponen during a power play. Not long after, Matej Pekar could score the last goal of the run with assists from Levin and Chenier, bringing the team within one point of their visitors at 5-4.

Minnesota Wild prospect Damien Giroux pushed this gap to two with his 36th goal of the season at 17:29. But Sudbury's Robinson responded within the minute with one of his own at 18:18, unassisted, making it 6-5.

With one minute and 30 seconds remaining, the Spirit's Cole Coskey beat Weeks between the posts to finish the period two points ahead of their Northern hosts and give Saginaw its game-winning goal.

Hutcheson made it a 7-6 game three minutes into the third period, assisted by Murray and Emmett Serensits, but the move would prove to be too little, too late for the boys in blue.

Saginaw's Giroux scored his second goal of the evening nine minutes into play, followed by Busdeker 10 minutes later and one final goal by Spirit's Baber with 12 seconds remaining.

The Sudbury Wolves are first in the Central Division, second in the Eastern Conference and fourth overall, with a record of 29-26.

They return to the Sudbury Arena on Sunday (Feb. 23), to host the Ottawa 67's, also for the last of two season matchups. This time it will be Sudbury with their eye on the prize, having been defeated 6-3 at TD Place back in November.