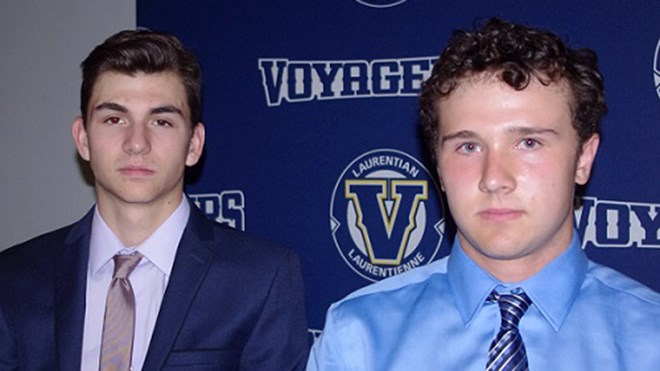 Tanner Morrison (left) and Christopher Benoit (right) at a press conference earlier this week, announcing their decision to play baseball with the Laurentian University Voyageurs. (Supplied)

Products of the Sudbury Baseball Academy Voyageurs program, locals Christopher Benoit and Tanner Morrison did not have to look far to find the perfect fit when it came time to make a post-secondary baseball related decision.

Those decisions pleased coach Brodie Jeffery and the Laurentian Voyageurs baseball team, who will welcome the Sudbury tandem to the fold, beginning this September.

Graduates of St Charles College and Bishop Alexander Carter Catholic Secondary School respectively, Benoit and Morrison were presented to local media earlier this week, following the announcement of their desire to continue playing the sport that they love, right here in their own back yard.

"Since Laurentian first came out with their program, it's always been a goal of mine to play for them," said Benoit. "I wasn't really too fond about going down south. Laurentian was just the better fit. There's just something about playing for the hometown that makes it special."

Morrison, for his part, was perhaps just a touch more pragmatic, all while sharing the same final destination as his diamond teammate. "I'm not really ready to live on my own," said the 17 year old with a laugh. "I was looking for a place close to home."

"I would like to live at home, I just find it a lot nicer, and Laurentian has a really good Criminology program. I really had everything I could want at home."

Though the distance from their family residences to the campus of Laurentian University may have been short, the route they voyaged in finding their way to the L.U. baseball program was anybody but direct.

A "AAA" hockey talent through his peewee and bantam years, Benoit would see one door open as another one closed. "I didn't make the midget "AAA" team and figured I would give baseball a whirl," he said. "I had started with the Shamrocks, then represented Team North at the Ontario Summer Games. It turns out I was doing well."

Over time, Benoit would also perfect a somewhat unique pitching delivery, one which seems to have served him well as he prepares to unveil it to the OUA hitting talent. "My arm angle is very rare, it's not taught," he said.

"I rely on movement and control, that's always been my game, especially with dropping down with my arm angle. I'm getting a lot more movement that a lot of the guys don't get throwing over the top. It's proven effective for me, even down in the States."

Morrison can relate to the concept of carving out his own pathway. "I was actually playing slo-pitch, in Azilda, for most of my life, and then we saw an opportunity with the Shamrocks and my dad put me in for a few years, and then the (Sudbury) Voyageurs opened up and it was a great opportunity for me," he said.

"It's obviously completely different for the hitting, but the fielding is the same, really, just a little bit of a smaller ball."

A middle infielder these days who sees himself as a second base option, primarily, at the university level, Morrison suggested that his bat skills have really improved simply by virtue of the level of opposition which he has faced since signing on with coach Jean-Gilles Larocque and the Baseball Academy.

"The guys that we play against can throw," he said. "A lot of them are going to be going to university next year. When we went to West Virginia last year, we faced a guy who was throwing ninety with a really good slider."

"Instead of having a guy throwing seventy with a sloppy curve ball and you've got a lot of time to think, his ball would really drip, right at the end. You've got to read the pitcher to become a better hitter."

"In my first outing, when I get a shot, I've got to prove myself, make the plays I need to make."

For Morrison and Benoit and the remainder of the 2019 Laurentian Voyageurs baseball team, that first outing is expected to take place some time around Saturday, September 7th, with talk of the possibility of both the Carleton Ravens and Ottawa Gee Gees soon joining the Ontario fold that numbered ten teams last year.