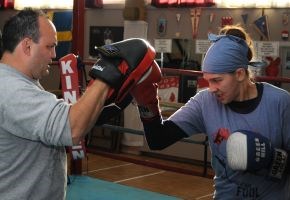 Sudbury's Amber Konikow has intense training in the weeks ahead as she prepares for the World Championships in Ningbo, China on Nov. 22-29. Here Konikow trains with her coach, Gord Apolloni. Photo by Sabrina Byrnes.

Sudbury's pugilist Amber Konikow will be representing Sudbury as her dream to compete at the World Championships has now come true.

Konikow, the two-time Canadian Champion, turns 34 years old Nov. 1. She had originally been told by Boxing Canada that because of her age, she would not be able to compete. The age of 34 is the cut off to compete internationally.

While disappointed, Konikow had made peace with the fact that she wouldn't be able to compete. That is until the morning of Oct. 16, when she came across an invitation from the Chinese Boxing Federation.

Curiosity got the best of her and she started to look at it to see what she would have missed at the World Championships. As she skimmed through the rules, she realized they were accepting boxers from the age of 17-34.

They were accepting boxers by the year they were born - not the month. The realization began to sink in that she would be eligible to compete.

She immediately e-mailed the Chinese Boxing Federation and received an email back from them, along with the International Boxing Association, confirming that she was eligible to compete.

"This is what I wanted," Konikow said.

"That's why I wanted to win Nationals for the second time, because I knew that was my only opportunity to go to the Worlds. It's short notice, but I still take it as a positive. (I'm) just going to have to work a little harder."

The pugilist now has the challenge of training and raising money to get her to the competition. She needs to raise $3000 to cover travel costs, hotel and other expenses.

Konikow has less than four weeks to train for the World Championships which takes place in Ningbo, China, Nov. 22-29.

"I have to treat it like it is once in a life time and go for the win," she said.

Konikow will be the first female boxer from Sudbury to attend the World competitions.

A fundraising boxing event will be held Nov. 8 at the Top Glove Boxing Academy to help raise money to get Konikow to the World Championships. For more information phone 674-2693.