Casey MacNeil was on her way to a qualifying event in Palm Springs when a driver blew a red light
0
Aug 20, 2019 2:45 PM By: Darren MacDonald 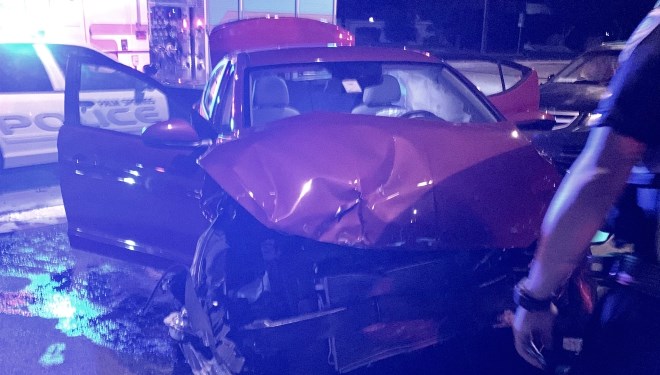 Casey MacNeil, a pro at Timberwolf in Sudbury, had her dreams of qualifying for the LPGA this year dashed on Sunday. A man in Palm Springs, Calif., blew through a red light, causing MacNeil's rented car (pictured) to smash into his passenger's seat. She escaped major injury but will miss a vital qualifying tournament this week. (Supplied)

A local golf pro's dreams of qualifying for the Ladies Professional Golf Association tour were dealt a blow this week when a car crash forced her to pull out of a key tournament.

Casey MacNeil, 24, an assistant pro at Timberwolf Golf Academy, wasn't seriously hurt in the accident, but she was banged up enough she has to miss the LPGA qualifying tournament in Palm Desert, just south of Palm Springs, which began Monday.

MacNeil landed in California on Sunday evening. She was driving to her hotel in her rental car around 11:30 p.m. when she was hit by another driver who went through a red light.

“It was not like it just turned red or anything, he just ran through the intersection,” MacNeil said Monday, on the phone from California. “So I t-boned him at a fast pace — he was speeding, probably doing, like, a hundred. But I got most of the damage. It happened super fast.”

Local police have wrapped up their work, MacNeil said, and found the other driver was completely at fault. But that doesn't help the bruised and scratched golfer from Northern Ontario, who has been working for years to earn her tour card.

“I'm walking away from it, which is pretty good, but I'm definitely banged up so I had to withdraw,” she said.

The three-tournament qualifier includes one tournament this week, and then two more in October. But missing the first event means MacNeil has no chance to make it this year – after missing the cut at the same tournament by just one stroke in 2018.

The Espanola native has been golfing since she was six years old, and was a bronze medalist at the 2010 Ontario Summer Games. At university in the U.S., she competed in NCAA Division 1 Women's Golf from 2012-16, and won the University of Wisconsin Green Bay Invitational in 2013. She turned pro after graduating in 2016 and has been working for her LPGA tour card ever since.

She qualified for the Symetra Tour last year — which operates as a sort of futures league for the LPGA – with conditional tour status and was aiming to take the next step this year. Despite the setback, it's a dream she says she'll keep pursuing next year.

“I've been working hard on my golf game all year trying to get ready for this moment,” MacNeil said from California. “I was trying to get my full tour card — that was the goal.”

Junior Sons win in dramatic fashion in Barrie
Jan 17, 2020 7:00 PM
Comments
We welcome your feedback and encourage you to share your thoughts on this story. We ask that you be respectful of others and their points of view, refrain from personal attacks and stay on topic. To learn about our commenting policies and how we moderate, please read our Community Guidelines.