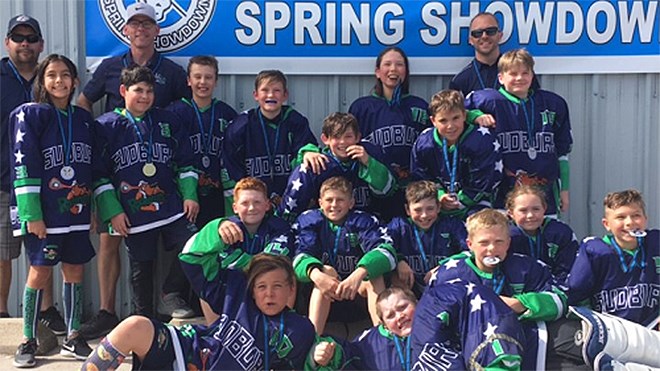 Local rep lacrosse teams have not grown accustomed to collecting the hardware, in recent years, participating in tournaments south of Barrie, but that may be starting to change.

All three of the Sudbury Rockhounds' delegations that attended the 2019 Stayner Hitmen Spring Showdown finished in the top three in their respective divisions, led by the Sudbury Peewee Rockhounds, who were golden in the event that targetted the "D/E" grouping of teams in central Ontario.

A solid display of speed and athleticism allowed the locals to hit the ground running, trouncing the Tyendinaga Thunderbirds 13-1 in the opener, as Keegan Adair (4) and Caleb Mead (3) combined for seven goals.

Rounding out the scoring for the winners were Kai D'Amour (2), Xavier Esquimaux-Osawamick, Matti Jouppi, Nolan Schiewek and Alex Rietze, as Sudbury scored seven times in the final period to pull away easily in their tournament ice-breaker.

A rock solid performance from goaltender Braden Paradis allowed the Rockhounds to gradually hit their stride the next morning, blowing open a close 3-2 game with four unanswered goals in the third period, stopping the host Stayner Hitmen 7-2.

Matti Jouppi recorded the hat trick and Xavier Esquimaux-Osawamick scored two big goals in the final frame for Sudbury, with Jeremy Rheaume and Keegan Adair also joining them on the scoresheet.

The real test for the Peewee lads would come Sunday morning in game three, as the Rockhounds took a 5-3 lead over the Guelph Regals #3, holding on through the final period of play to register victory by that exact same score.

Jeremy Rheaume (2), Nolan Schiewek, Kai D'Amour and Keegan Adair handled the offense in a contest that featured eight minor penalties doled out to each team by the game officials. With that scare out of the way, the Rockhounds wasted no time asserting themselves in the final, scoring five times in the first period and cruising to a 10-1 win over the Quinte Bayhawks in the championship affair.

Jeremy Rheaume continued to hold the hot hand late in the tournament, hitting for a four-spot, giving him seven goals in the final three games to lead the way for Sudbury. Alex Rietze scored twice and Keegan Adair, Kai D'Amour, Luca Mallozzi and novice affiliate Hunter Currie also found the back of the net, with the latter showcasing his speed late in the game, winning a draw and driving directly to the net for his tally.

"This team is exciting to watch."