Time and patience have lead to a dream come true for one Sudbury man. Dean Aelick can’t stop smiling as he talks about the new disc golf course he has built at Selkirk Park in the Donovan.
0
Oct 28, 2009 7:16 PM By: Laurel Myers 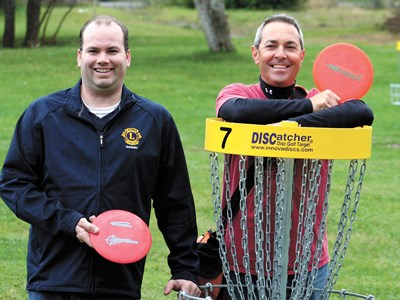 Stephane Aubé (left), immediate past president of the Lions Club of Sudbury, stands with Dean Aelick, president of the Sudbury Disc Golf club, at the new disc golf course built on the grounds of Selkirk Park in the Donovan.

Time and patience have lead to a dream come true for one Sudbury man. Dean Aelick can’t stop smiling as he talks about the new disc golf course he has built at Selkirk Park in the Donovan.

An avid Ultimate Frisbee player, Aelick was first introduced to disc golf by a fellow Ultimate player at a tournament in 2006.

“He had set up an nine-hole portable course and he lent me one of his discs,” he said in a previous interview with Northern Life. “I immediately thought, wow, this is a combination of my two favourite sports - Ultimate and golf.”

Disc golf is much like regular golf, but instead of clubs, balls and holes, it is played with a disc and baskets.

Ever since that tournament, Aelick has been trying to increase the exposure of the sport and get others involved.

Last summer, Aelick spoke with excitement about creating a disc golf course within the city. In May, he got the ball rolling when he stumbled upon the “perfect piece of parkland” that was “screaming for a disc golf course,” he wrote on his blog at discgolfontario.com, speaking of Selkirk Park and the land adjacent to it.

“The parcel of land is fully treed and will easily accept 18 holes,” Aelick wrote.

While the course is currently only stretched across Selkirk Park, the adjacent piece of land is part of the long-term plans — one to three years — to bump the course up to 18 holes.

The property, about 10 acres, allows for championship length (400 feet) holes, with natural obstacles, including trees and a creek. The course will also be lit up at night with two streetlights already in place in the middle of the park.

Following a series of meetings, presentations and proposals submitted to the city, Aelick was set to put a shovel in the ground by the summer.

In creating the course, Aelick logged a number of hours trimming trees, drilling holes to cement the baskets in, and installing tee box signs at each hole.

On Oct. 6, he announced on the blog that the first nine holes of the course were finally finished.

While Aelick has done the brunt of the work on his own, he said he’s going to need volunteers to help in developing the remaining nine holes, which will involve “raising the canopy of the forest to about eight feet, so people walking don’t get poked in the eye or lose their disc,” as well as clearing any potential hazards.

He emphasized, that besides getting rid of dead trees and trees that are in the route of a fairway, the land would not be disturbed. “We’re not going in there with bulldozers, like a golf course. The land will not be moved,” he said. “And any tree cut down will be put through a chipper and recycled into mulch.”

Aelick explained that the parcel of land has become a dumping grounds of sorts.

“We’re actually going to be doing a great thing for the city, in that we’re using a forest that is littered with garbage,” he said. “That’s going to be a clean-up effort on our part and we’re going to beautify this land that is raw and disgusting at the moment, to tell you the truth.”

The development of the course was made possible by the Lions Club of Sudbury, which stepped up with $7,000 worth of funding, following a presentation Aelick made to the club in early May.

Stephane Aubé, immediate past president of the Lions Club of Sudbury, said the Lions were eager to get behind the project because it was the first of its kind in the area, and disc golf is a sport the whole family can do together.

“We hear all this talk about healthy living,” he said. “This is just one more way to do it.”

As part of the agreement with the city to use the land, Aelick said there will be no additional city funds used to keep the course going. “The Sudbury Disc Golf Club will be doing all the fundraising, there are no taxpayer dollars involved in this at all.”

Aelick has reported a number of people already being spotted playing the course, and he said he hopes the trend continues. “What I’m really doing is introducing a new sport to the city. It’s free to play, and a good source of exercise.”

For more information, contact Dean Aelick by phone at 626-6243 or by e-mail at sudburydiscgolf@gmail.com.