Tessa Bonhomme skates away with Battle of the Blades crown

Sudbury's Tessa Bonhomme added another championship title to her résumé Monday night, after being crowned the winner of CBC's third season of Battle of the Blades .
Nov 15, 2011 3:40 PM By: Sudbury.com Staff 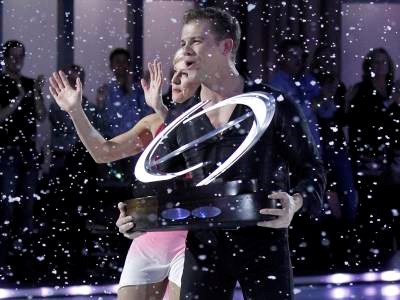 Sudbury's Tessa Bonhomme added another championship title to her résumé Monday night, after being crowned the winner of CBC's third season of Battle of the Blades.

She also was the first female hockey player to take part in the reality show, which involves hockey players learning how to figure skate.

The Olympians were one of three couples remaining in Monday night's finale. The pair, who had been popular with the voters all season long, won the overall fan's vote to capture first place.

“I walked in here a hockey player, surrounded by seven figure skating girls, and not knowing what to expect,” Bonhomme said after being crowned. “I had the time of my life, and I would do this 20 times over.”

The winners earned $100,000 for the charities of their choice. Bonhomme's half of the prize will go to the Canadian Breast Cancer Foundation CIBC Run for the Cure in Sudbury, a cause she has supported for a number of years, acting as honourary chair for the event.

Pelletier chose to give his portion to the Ronald McDonald House of Southern Alberta.

Over three years, the show has awarded nearly $1 million to charities.