Triple overtime: Luukkonen and the Wolves refuse to go down without a fight 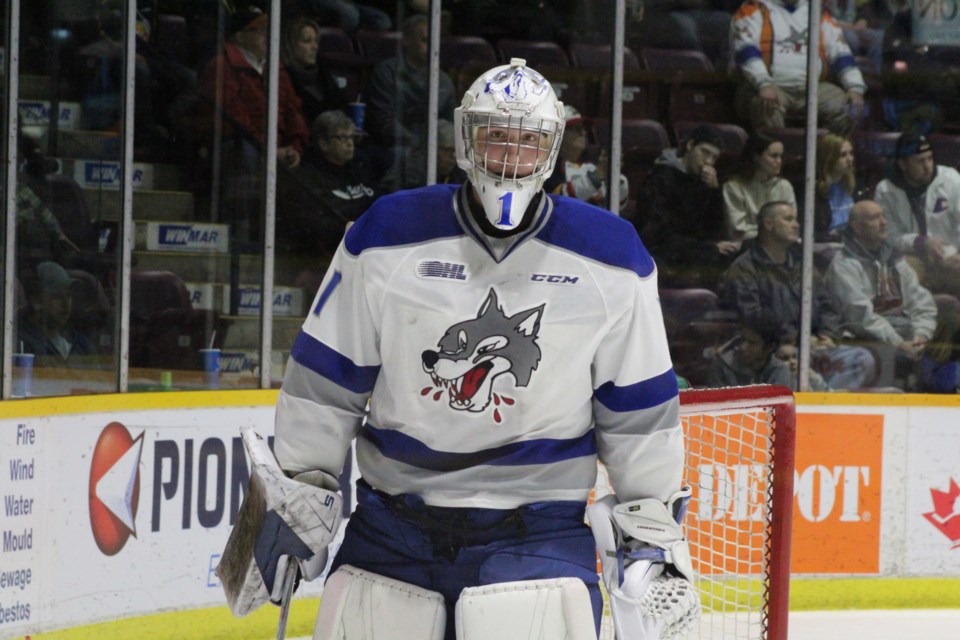 At the end of the game, the crowd lurched to its feet in a standing ovation, capped off with an emotional send-off for star goalie Ukko-Pekka Luukkonen, whose exploits between the pipes this season kept the team in many a game. (Raymond Bowe/BarrieToday)

After an intense three overtime periods, the Sudbury Wolves playoff hopes ended in a hard fought, heartbreaker of a game, with a final score of 3-2.

At the end of the game, the crowd lurched to its feet in a standing ovation, capped off with an emotional send-off for star goalie Ukko-Pekka Luukkonen, whose exploits between the pipes this season kept the team in many a game.

Luukkonen was the last Wolf to leave the ice, bowing to a roaring crowd from centre ice before heading to the dressing room.

The loss was perhaps all the more emotional due to a disputed call in the final overtime period. The crowd seethed with anger when Owen Gilhula was called for slashing, a call that likely cost the exhausted, short-handed Pack the game.

Shots on goal slightly favoured Ottawa at 63-60. Luukkonen and Shane Bulitka earned first and second stars of the game, respectively.

After the period, there were indications the game would be a grinder. After 20 minutes and 20 shots (11 for the WolveS), the scoreboard was knotted at 0-0.

Ottawa's Mitchell Hoelscher drew first blood at 4:19 of the second period. The Wolves Adam Ruzicka tied it up shortly after when he turned a feed from David Levin into a goal. Sudbury would take the lead not long after that when Nolan Hutcheson banged in a rebound.

Ottawa tied it up again in the third thanks to Kyle Maksimovich.

Two intense and exhausting periods followed. The toll on the players was obvious as play from both teams became sloppier and sloppier the longer the game dragged on.

Finally, after a penalty call on the Wolves that had fans boiling with rage, 67s' Tye Felhaber scored the game winner and ended the Pack's playoff hopes, bringing a record-breaking Sudbury season to an end.