What is it about these Johnstons and hockey? (3 photos) 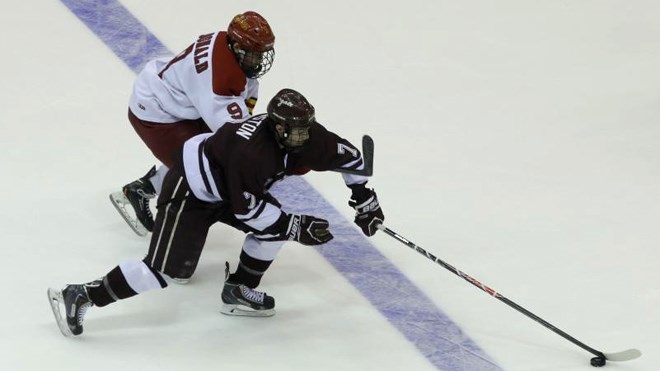 A former 10th-round draft pick of the Kitchener Rangers in 2008, Ryan is not only the younger brother of double-gold medal winner Rebecca Johnston, but is also following in the footsteps of Jacob (Johnston), who recently completed his second year in the East Coast Hockey League, amassing 35 points in 59 games with the Utah Grizzlies.

Throw in the fact that all six of the Johnston siblings are also nieces and nephews of current Pittsburgh Penguins head coach Mike Johnston, and there is some serious hockey lineage at play within the Lo-Ellen Park clan. As for Ryan, his career at Colgate followed a pair of very successful seasons with the Nepean Raiders of the CCHL, registering just under a point a game in 114 encounters with the junior club.

In fact, success has followed him around, with Johnston a key element on the blueline of the Sudbury Nickel Capital Wolves Telus Cup championship team in 2007-2008. The 23-year-old rearguard was signed after attending a Montreal Canadiens development camp last week.

He is expected to start the 2015-2016 season as a member of the St. John's Ice Caps of the American Hockey League, a roster that currently includes the likes of goaltender Zach Fucale, as well as Habs' prospects Nikita Scherbak and Christian Thomas.

"I want to thank Ryan for his three years at Colgate," noted Raiders head coach Don Vaughan on the university website. "Ryan feels at this time he is ready to take the next step in achieving his goal of playing in the National Hockey League. We wish him nothing but the best as he moves onto his professional career."