Wolves add size and skill in U18 Priority Selection 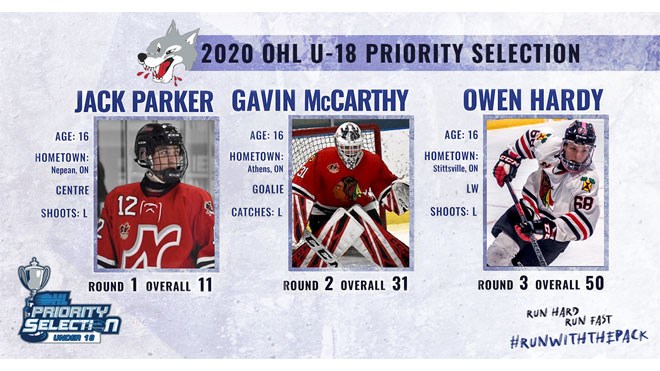 "We are very happy with the U18 draft," said Sudbury Wolves VP and general manager Rob Papineau. "We have had great success in the past and have had a player from each of the past three drafts play in the OHL."

With the 11th overall selection in the draft, the Wolves selected forward Jack Parker from the Nepean Raiders Midget AAA. The Nepean native scored big goals for his team this past season. Parker notched 25 goals and added 33 assists for 58 points in 43 games.

"Jack is a very skilled forward with great hands and creativity," said Papineau. "He is very smart and can beat you in many different ways. He is almost 6-4 and as he adds more muscle to his frame, he has a very high ceiling. We felt Jack was one of the most skilled players available today who finished in the top 10 in league scoring."

In the second round, 31st overall, the Wolves selected goaltender Gavin McCarthy from the Brockville Braves Midget AAA. The 5-10, 155 lb. goalie was outstanding for his team this past year, notching a 2.39 goals against average and a 0.922 save percentage.

"Gavin has had two very strong midget seasons for Brockville. He competes hard and never quits on a puck. He is athletic and has the potential to still grow as his family has a lot of height in it. He was excellent every game we watched and always gave Brockville a chance to win."

In the third and final round, the Wolves selected left winger Owen Hardy 50th overall from the Brockville Braves.

The Stittsville, Ont. native was his team's top scorer and among the league leaders this past season in HEO with Brockville. The 5-8, 176-pound speedy winger notched scored 18 goals and added 35 assists for 53 points in 45 games last season.

"Owen is a player that every game jumped off the ice to our staff. A quick player who has a great motor with strong edges and over a point per game player. He was the key guy offensively for Brockville."

Fans can secure their season seats for the 2020-2021 season online or by emailing office@sudburywolves.com for more information.

Purchase by May 1 to receive early cash savings.