Wolves lose to Steelheads in shootout 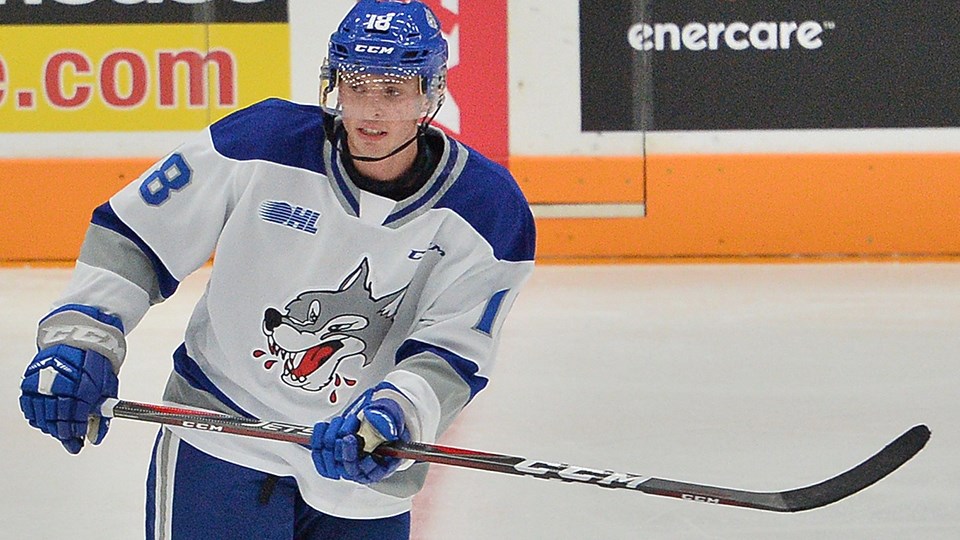 The Sudbury Wolves hosted the Mississauga Steelheads Sunday, March 1, hoping to claim their fourth victory against the visitors, in their last of seven season matchups.

In the end, the match fell to Mississauga, following a goal-free overtime that led both teams into a shootout knotted at three. Ultimately ending with a 4-3 final in favour of the Steelheads.

St. Louis Blues' prospect Keean Washkurak opened up the scoreboard for Mississauga during a power play 12 minutes in, brought about by a tripping call on Wolves' Macauley Carson. He was assisted in his 20th goal of the season by Nick Isaacson and Florida Panthers' prospect, Cole Schwindt.

Schwindt returned to net a little over six minutes later, closing the period with one final goal for Mississauga, assisted by Ole Bjorgvik-Holm and Aidan Prueter.

The pack trailed by two points heading into the second period, with shots on goal 8-7 in their favour.

Sudbury evened the score in the second period with two nearly back-to-back goals, around five minutes into play.

The first was delivered by Robinson with help from Matej Pekar and Jack Thompson. The second, by Chase Stillman, assisted by Brad Chenier and Carson.

Washkurak responded on behalf of the Steelheads during another power play at 9:29, this time, resulting from an interference call on Nolan Hutcheson. Pushing the team ahead by one with assistance from Schwindt and Calvin Martin.

But the period wasn't over yet.

Sudbury's Blake Murray neutralized the scoreboard with just over three minutes remaining, with help from Robinson and Pekar.

The teams moved into the final frame knotted three points apiece, with shots on goal 17-8 in favour of the Wolfpack.

Both sides of the ice fought for dominance in the third period, but neither managed to beat netminder Weeks or his Mississauga counterpart Kai Edmonds. Forcing the teams to carry their 3-3 stalemate into overtime.

Shots on goal were 9-7 in favour of Mississauga.

Weeks and Edmonds kept their iron grip on the posts in overtime, denying either team the opportunity to break out of the tie. After five minutes and no goals, the team's moved to a shootout.

The first attempt was made by Murray, who missed and was followed by Steelheads' James Hardie, who scored the team's game-winning goal. Next to the net was Sudbury's Quinton Byfield, Mississauga's Schwindt and Wolves' Pekar, none of which scored.

The game was called at a 4-3 final for Mississauga.

Sudbury Wolves are first in the Central Division, second in the Eastern Conference and fourth overall, with 32 wins and 26 defeats.

The Wolfpack trots South Thursday, hoping to claim their eighth straight victory over the Barrie Colts in their last matchup of the regular season. Game time is 7:30 p.m. at Colts Centre.

Colts sit second in the Central Divison behind the pack, fifth in the Eastern Conference and 12th overall, with a record of 27-25.

Local basketball talent Aneisha Rismond commits to Voyageurs
Nov 20, 2020 7:00 PM
Comments
We welcome your feedback and encourage you to share your thoughts. We ask that you be respectful of others and their points of view, refrain from personal attacks and stay on topic. To learn about our commenting policies and how we moderate, please read our Community Guidelines.