Sudbury Wolves get their revenge against the travelling Kingston Frotenacs
Mar 8, 2020 7:00 PM By: Sudbury.com Staff 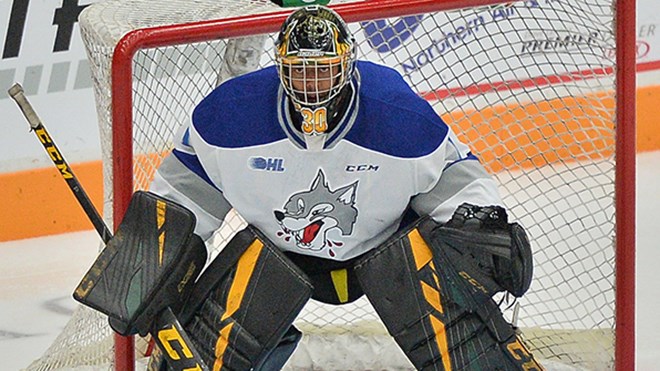 Wolves' Christian Purboo secured his third OHL career shutout at Sudbury Arena on March 8, giving Nickel City the backing it needed to enact their revenge against the Kingston Frotenacs.

It had been nearly five months since the wolfpack was defeated by two points in Kingston, but the boys in blue were ready and waiting. Sudbury scored their first point less than five minutes into play and never looked back, delivering seven more over the course of the 60-minute affair, to finish with an 8-0 final in their favour.

Sudbury netminder Purboo was named the first star of the game for his performance, followed by second star Owen Robinson and third star Matej Pekar.

Blake Murray got things started for the Wolves with his 35th goal of the season during a power play, four minutes and 27 seconds into play. He was assisted in what would later be considered the evening's game-winning goal, by Pekar and Brad Chenier.

Chenier returned to net one of his own a little over five minutes later, also during a power play, with assistance provided by David Levin and Quinton Byfield.

Wolves' Adam Samuelsson scored one more for Sudbury before the period came to a close, assisted by Emmett Serensits and Nolan Hutcheson.

It was easily the roughest period of regulation in terms of penalties. Kingston spent 10 minutes behind glass that period for tripping, slashing, roughing, high sticking and a bench minor, while the Wolves earned six minutes for cross-checking, roughing and high-sticking.

Sudbury moved to the middle frame up by three, with shots on goal 12-10 in their favour.

Pekar moved from helper to handler in the second period, scoring his 28th goal of the season 3:49 into play, with help from Robinson and Isaak Phillips.

A little under four minutes later the Buffalo Sabres prospect was back to assist Owen Gilhula in his 13th goal of the season, alongside Robinson.

The score was stacked 5-0 in favour of Sudbury moving into the final frame, with shots on goal that period 13-12 their favour.

Nickel City finished the night off strong with three goals in the third, starting with Nolan Hutcheson 12:53 into play. Assisted by Jack Thompson and Landon McCallum.

Chenier scored his second of the evening and 27th of the season a few minutes later, building Sudbury's enormous lead further with help from Pekar.

The final goal of the evening was made by Gilhula with two minutes and 19 seconds remaining in play, assisted by Gilhula and Pekar.

The final score was 8-0 for the Wolves.

Sudbury outshot their visitors 12-10 in the final frame and 37-32 overall.

The Pack kick off their last regular-season road trip Thursday, looking to claim their third victory of four-season matchups against the Peterborough Petes.

Petes sit second in the East Division, third in the Eastern Conference behind the wolfpack, and seventh overall, with a record of 36-21.