Jasmine Tessier might well mount the podium at future OFSAA Wrestling Championships, but she will never completely duplicate her performance from the 2016 meet in Windsor.
0
Apr 6, 2016 9:59 PM By: Randy Pascal 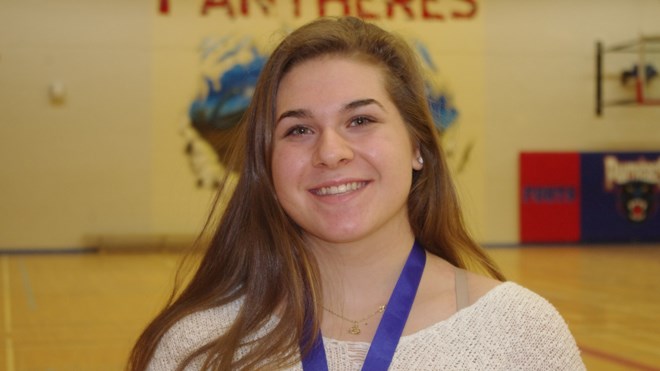 Jasmine Tessier might well mount the podium at future OFSAA Wrestling Championships, but she will never completely duplicate her performance from the 2016 meet in Windsor.

The 14-year-old Grade 9 student at Ecole Secondaire Macdonald-Cartier not only earned a silver medal in the 83kg classification earlier this month, but also produced the best-ever showing by a first year student at a school known for its abundance of quality wrestlers, dating back to the 1970s and 1980s.

It was a feat not lost, in the least, on a wrestling family, with older brother Eric (17 and Grade 11), and father Rick, an assistant coach to Guy Quenville and former wrestler and coach at Ecole Secondaire Hanmer, both in attendance.

Still, her initial entry to the sport was somewhat through the side door. "When I was in Grade 6, my brother started wrestling, and he was participating in the Winter Games," recalled Tessier.

"They were missing volunteers, so I decided to volunteer for timekeeping. I just got really into it, and that year, did my first provincials and finished third." Her meteoric climb, however, did not come without a few bumps along the way.

In Grade 8, she missed virtually the entire season due to knee surgery, the result of an injury to her ACL. Somewhat surprisingly, she now views the setback as a potential benefit to her development moving forward.

"My coaches say that I am a lot better than I was before (the injury)," said Tessier. "I'm more cautious about everything, which makes me more alert about my moves and stuff. It gives me better technique, and a better understanding of the sport. But it took me a while to get over the fear of getting hurt again."

Slowly she recovered, easing back in with strong family support. "It really helped that my dad is one of my coaches, and my brother could help me at home," she said.

By the time February rolled around, Tessier was in fine form, finishing first at both the SDSSAA and NOSSA competitions. That said, she was completely grounded as she eyed her first trip to the all-Ontario high school championships.

"Honestly, my goal was just to make the second day of OFSAA, which means you need to win two matches," she said. Yet as she began disposing of the competition, some final touchups to her skill-set were clearly producing results.

"I'm more of a ground wrestler, but it surprised me at OFSAA, that I was throwing a lot," she said. "I did bear hugs. I was doing things that I don't normally do." Things that she had worked on extensively in the week or two between NOSSA and OFSAA.

Facing Kara Nixon in the gold medal bout, Tessier did not look out of place, facing an opponent four years her elder. "I threw her for four points in the final, but then I went to do a bear hug. She was very tall. She grabbed me and lifted me, tripped me. Now, my coach showed me how to get out of that."

Focused completely on constant improvement, Tessier is looking at the possibility of dropping down to the 77kg classification for 2016-2017, a body weight she is far closer to.

The move would offer a different set of challenges. "It takes a while to understand how that weight class works, their movements," she said. "At 83kg, they're a little slower, but super strong. But they can get a little lazy at 83kg, where at 77kg, they fight a lot more against your moves."

But that is not a decision that needs to be made until the fall. In the meantime, Tessier is hoping to attend the Cadet/Juvenile Canadian Championships, being hosted in Calgary April 15-17.

In the meantime, she will continue to push herself, both in practice and on the homefront, taking full advantage of the mats that are installed in the family residence. "A lot of people think that Eric (her brother) and I are dating - we're always together," she said. "But he is my biggest supporter. He is my idol - I look up to him so much."

And vice-versa, as the Tessier clan celebrate an accomplishment not previously seen at the home of the Panthères.