The fact an NDP leader was in town this week talking about cutting taxes for small business is a testament to how difficult it's getting to tell where the centre and left is these days in Canadian politics.
Jul 29, 2015 3:28 PM By: Darren MacDonald 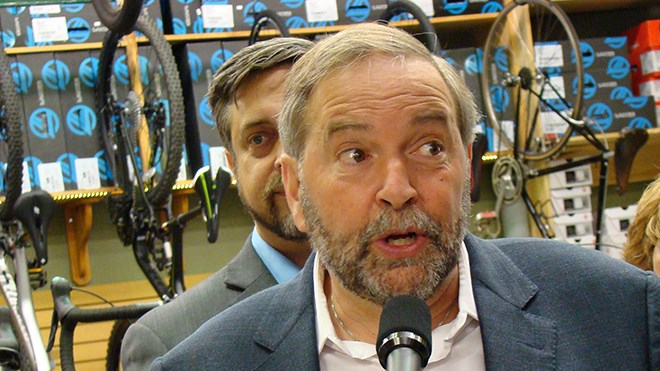 Federal NDP Leader Thomas Mulcair was in Sudbury on Monday, at the Outside Store on Long Lake Road, promoting his plan to cut small business taxes from 11 per cent to nine per cent. Heather Green-Oliver photo.

The fact an NDP leader was in town this week talking about cutting taxes for small business is a testament to how difficult it's getting to tell where the centre and left is these days in Canadian politics.

To be sure, Thomas Mulcair was also talking tax hikes to big corporations, but even there he promised just a “slight” increase.

It's been a good few months for Mulcair. He has become the most popular party leader in the nation, even if that doesn't translate into majority government. Rachel Notley's win in Alberta helps erase a psychological barrier to voting orange. If Alberta's one-party state can go soft left, anything is possible.

Plus the Liberal brand has taken a beating on several fronts. Sudbury voted Liberal in the February byelection, but that was on the strength of Glenn Thibeault, who even spurned NDP officials grudgingly admit privately is the best politician in the city.

More broadly, the byelection associated Liberal politics with backroom deals, opportunistic politics and an OPP investigation seemingly without end. Federally, Liberal Leader Justin Trudeau's inability to communicate a coherent vision for what he would do as prime minister seems to confirm the message of those ear worm Tory attack ads ('That's his inexperience showing').

Trudeau has slid from a solid No. 1 in the polls when he was in Sudbury in December 2013, to No. 3 today, and falling. Voters were warming to the idea of a socially progressive government that wouldn't harm us economically, until Trudeau began looking like such a lightweight.

When he supported Bill C-51, it smacked of opportunism because the bill was popular at time time. As opposition mounted, he was stuck with a choice of backing a bad bill or reversing course and looking even worse.

In contrast, Mulcair's steady, safe, consistent message has gained traction. In position to capitalize on voter fatigue with Prime Minister Stephen Harper, Mulcair is taking great pains to focus his message as being on a mission to get rid of the Conservatives.

In Sudbury and Nickel Belt, hard right Tories have never had much of a chance. Sudbury candidate Fred Slade, like provincial candidate Paula Peroni before him, is stuck selling a message that resonates with a small percentage of the electorate. The Greens have yet to break through in a big way anywhere.

The real battle here is likely Liberal versus New Democrat, whose messages have become so similar, the fate of candidates in both ridings are largely subject to what happens nationally. Premier Kathleen Wynne's strategy of co-opting the left's ideas, dangling fiscal carrots in key ridings and relying on PC Leader Tim Hudak to self destruct worked brilliantly. But she was already in power.

As it is, Liberals here and across the country have to hope Harper turns his guns soon on Mulcair and damages him in the way Trudeau has been damaged. But Mulcair is running an impressive campaign, with a level of organization and professionalism that runs deep. As it stands now, he is the tortoise to Trudeau's hare.