Costantini, then a precocious curly-haired tween, won the kids' portion of the contest, charming us with his covers of Disney songs. I've been thrilled to watch this young man, now aged 22, become one of the leaders of Sudbury's theatre community.
Jun 19, 2015 6:14 PM By: Heidi Ulrichsen 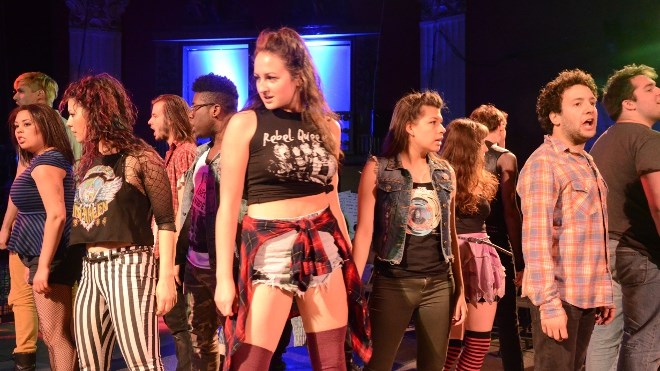 YES Theatre's American Idiot runs at the Grand Theatre until June 27. File photo.
Costantini, then a precocious curly-haired tween, won the kids' portion of the contest, charming us with his covers of Disney songs.

I've been thrilled to watch this young man, now aged 22, become one of the leaders of Sudbury's theatre community.

He started YES Theatre, which aims to give local artists an avenue to develop and share their talent, in 2010, when he was still a teenager. Past shows include "Hair," "Rent," and "Spring Awakening."

Costantini caught the attention of Northern Life in 2011, when he was awarded with a Community Builders Award of Excellence in the Young Leader category.

Largely based on the music of punk rock band Green Day's 2004 album of the same name, "American Idiot" features three disaffected young men, Johnny, Will and Tunny, dealing with a post-9/11 world.

Will (played by Jake Deeth) stays at home to work out his relationship with his pregnant girlfriend, Heather (Gabriella Albino).

YES Theatre's version is staged in the downtown's historic Grand Theatre, utilizing the entire space for their energetic (and even acrobatic) performance.

“You need a certain type of adrenaline to do it,” said Costantini, speaking to NorthernLife.ca with a raspy voice brought on by his previous evening's taxing performance.

“It's really challenging, very rewarding, and it's amazing sitting on a stage with 14 other actors who are just as invested as you. It's a gift, yeah.”

I was blown away by the musical talent of the 15 young people who make up the cast, as well as their live accompanists.

Most of the performers come from the Sudbury area, while a few others are Costantini's friends from George Brown's theatre arts program.

Based on their basically flawless performance, I would have to say that YES Theatre has succeeded in its mission to train local performers.

Even though I found the plot a little vague — Costantini himself admits it's a bit “loose and up for interpretation” — I'd definitely encourage you to go see it, especially if you're a fan of Green Day's music.

American Idiot runs until June 27. Tickets are $35 for adults, and $25 for students/seniors.

In August, YES Theatre takes a dramatic change of tack, staging the classic musical "Fiddler on the Roof" at Sudbury Theatre Centre.

For more information, and to purchase tickets to either performance, visit www.yestheatre.com.

Heidi Ulrichsen has worked for NorthernLife.ca for more than a decade. She's the associate content editor, and also covers the lifestyle and education beats.