Jesse was a great guy and a soldier, not merely a statistic

When you work in the news business in your hometown, as I have for more than a decade, you often end up writing about people you've known many years. This can be a joy, but there's been a few times when tragedy made it a whole different matter.
0
Jan 21, 2016 4:11 PM By: Heidi Ulrichsen 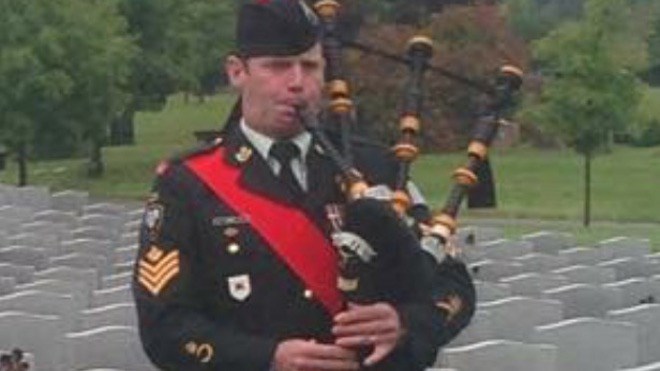 Sgt. Jesse Tait enjoying one of his favourite pastimes — playing the bagpipes. Supplied photo.
When you work in the news business in your hometown, as I have for more than a decade, you often end up writing about people you've known many years.

This can be a joy, but there's been a few times when tragedy made it a whole different matter.

Nearly a year ago, on Jan. 22, 2015, the body of 34-year-old Sudbury-born soldier Sgt. Jesse Tait was recovered from the Kaministiquia River near Thunder Bay, after going missing from Canadian Forces Base Shilo in Manitoba. No foul play was suspected.

A veteran of both the Bosnia-Herzegovina and Afghanistan conflicts, Jesse left behind his wife, Katrina, his young sons, Lochlan and Watson, his mother, Jocelyn, and sister, Meredith.

Just a month older than I am, Jesse was in the same grade as me at Lo-Ellen Park Secondary School.

His death was a blow, especially as it was shortly after the death of my 37-year-old cousin Christina, who passed away of natural causes in December 2014. I could barely bring myself to write the news brief announcing his death.

I got to know Jesse in our Grade 11 outdoor education class, when he ate some what-should-have-been inedible, mouldy beef jerky I'd made for a class project, probably just to make me laugh.

Because that's just how Jesse was — a kind, extremely energetic guy who would do just about anything to make other people laugh.

Jesse, a member of the 2964 Walden Irish army cadet corps as a teen, excelled at biathlon, and was also a talented bagpiper, a pastime he continued into adulthood. But I remember when he was just learning how to play the instrument.

As a teen, I teased him about practising in the grocery store parking lot. He also attempted to play the bagpipes one time with the Lo-Ellen concert band, of which I was a member, with mixed results.

Jesse was fond of wearing a kilt to class, a garment I can personally report he also wore to our OAC grad dance. I can picture his smiling face as we partied like it was 1999 (because it was).

We met again a couple more times in recent years, when I interviewed him for Northern Life about his military career.

I wrote about when he was named the One Canadian Mechanized Brigade Group (OCMBG) top combat soldier for 2005, and when he was deployed to Afghanistan in 2008.

My parents, Drs. Bob and Brenda Ulrichsen, have practised dentistry and optometry, respectively, in Copper Cliff for many years. The Tait family are among their patients, and they'd known Jesse since he was a kid.

My dad has been learning to play the bagpipes for the last couple of years. Knowing this, Jesse's mom, Jocelyn, recently loaned my dad Jesse's bagpipes, asking that he play them once in a while. My dad, and I, were stunned and honoured that she'd trust our family with the instrument.

A lot of information has come out lately about the number of Canadian soldiers who have died from suicide.

The Globe and Mail recently reported that 17 serving military members took their lives in 2015. Sixty-two have died from suicide after returning from Afghanistan.

These are stark statistics. Many have blamed the deaths on inadequate mental health programs available to combat veterans, a troubling accusation given what we ask soldiers to do and what that forces them to experience.

But to the people who knew him, Jesse wasn't a statistic. Let's remember that sunny-natured kid who grew up to be a father, soldier, musician and all-around great guy.

Column: YES Theatre's American Idiot shows depth of Sudbury talent
Jun 19, 2015 6:14 PM
Comments
We welcome your feedback and encourage you to share your thoughts on this story. We ask that you be respectful of others and their points of view, refrain from personal attacks and stay on topic. To learn about our commenting policies and how we moderate, please read our Community Guidelines.

Premier Ford to make an announcement at Queen's Park
0

Domestic air, train travel denied to anyone with COVID-19 symptoms
0