A new twist on some old favourites: Stories and Songs of Stompin' Tom 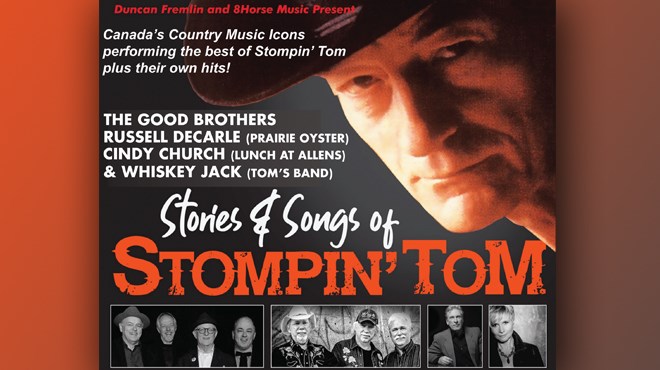 A group of Canadian country music mainstays are making a four-stop tour through Northern Ontario with Sudbury slated as the final stop on May 11. (Supplied)

A group of Canadian country music mainstays are making a four-stop tour through Northern Ontario with Sudbury slated as the final stop on May 11.

"It felt appropriate to end the tour in Sudbury, Tom has a strong connection with Sudbury and the city is always great to us," said Duncan Fremlin of Whiskey Jack, Stompin' Tom's band. "I toured a lot with Tom, so I came to the table with the foundation for the show and we all have our own personal experiences with Tom so everybody else jumps on and adds their stories to it, and we've all played Sudbury many times."

The show will be a blend of each artist's own music and covers of Stompin' Tom's hits and perhaps some lesser-known gems that the artists are hoping to introduce to their audiences.

"Unlike everyone else on this tour I didn't have the personal relationship with Tom, but he spoke to so much of this country's population through his music," said Cindy Church. "He has so many songs that we all know and love, but there are some more obscure ones like 'Songbird Valley' that are really quite beautiful and I've really been enjoying hearing those."

As the name of the tour suggests, there will be stories of Stompin' Tom interspersed throughout the evening, and Fremlin says it will bring Tom's memory to life.

Bruce Good says that covering some of Stompin' Tom's music brings on a unique and fun creative process for those on the tour.

"We're all bringing our own interpretation of his music," said Good. "We're not trying to copy what Tom did, because he was one of a kind."

Russell Decarle of Prairie Oyster was inspired to write his own song about Tom, that will be debuted on the tour.

"It might include his drinking," said Decarle with a laugh. "It might talk about him receiving an honourary doctorate from the University of Fredericton. Tom always loved that, he thought it was great if you called him Dr. Connors."

With each artist putting their own spin on Tom's music, they have been rediscovering the massive catalogue of songs that Stompin' Tom has to his name.

"Russell was doing a song and we came in while he was performing it and I said 'that's a great song, whose song is that?' and it was one of Tom's songs," said Fremlin. "It was so different and so hard to recognize but somehow it really came to life for me, it's really allowing us to rediscover some of these old songs."

Cindy Church has been relishing the opportunity to put her own flavour on some of Stompin' Toms songs and is excited to hear her fellow performers' takes on one of Canada's most iconic musicians' song library.

"Tom was such a guy's guy, so for me to have a chance to put my own sound to his music has been amazing," said Church. "I'm sure there will be some women in the audience and I'm excited to bring these songs to them in a way they've never heard them before."

Chuch likened the tour to an old school country music variety show, and Fremlin said there will be something for everyone who attends.

"It really spans a lot of genres, whether you're into folk, or country, or rock, it's a rare opportunity to experience all of these genres in one show," said Fremlin. "We're all just really excited to get out there and perform."

Tickets for the show can be purchased at sudburytheatre.com or by calling 705-674-8381.