Organization “getting some skin in the game” with 25-year financial commitment, says Jeff MacIntyre
0
Jun 15, 2017 9:46 AM By: Patrick Demers 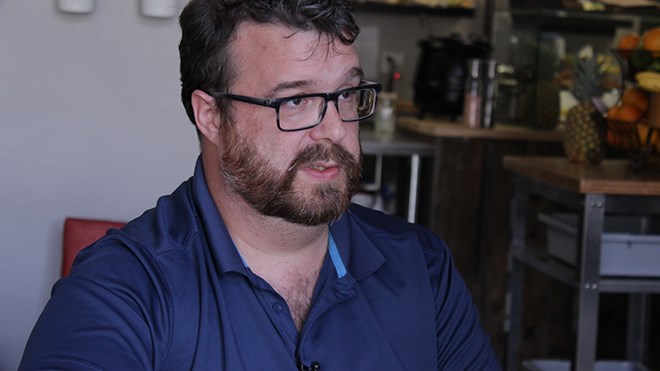 Sudbury.com has learned that a proposal submitted to council by the Downtown Sudbury BIA includes a financial commitment to a new event centre — should it be located downtown — of $2.2 million over 25 years. Jeff MacIntyre, chair of the BIA, confirmed the planned investment. (Callam Rodya/Sudbury.com)

As the date for a consultant's report outlining his recommended location for a new arena and event centre looms large, the Downtown Sudbury BIA (business improvement area) is “getting some skin in the game.”

Sudbury.com has learned that a proposal submitted to city council by the BIA includes a financial commitment to a new event centre — should it be located downtown — of $2.2 million over 25 years.

Downtown Sudbury board chair Jeff MacIntyre confirmed the proposal, which will still need approval from its membership — including more than 90 downtown property owners and some 400 businesses.

“We're going to have a vote next week,” MacIntyre told Sudbury.com. “We need to figure out exactly how it works with the city still.”

While Downtown Sudbury, which operates on an annual budget of around $500,000, is proposing to fund their $2.2 million investment through the levy paid to it by its membership, MacIntyre says the investment shouldn't directly impact the levy itself.

He feels a downtown event centre will spark enough spin-off economic development that it will actually bolster the BIA's coffers while reducing some its costs.

“As Downtown Sudbury grows, obviously the pool from which we can pull our levy increases at which point we can look at trying to recruit some budget over a wider spread,” said MacIntyre. “We feel there will be a reduction in the actual amount of marketing we need to do for the first few years because of all the media and attention the downtown is going to get from a new build and new things opening.

“We're going to try and leverage that as much as possible.”

MacIntyre says the BIA has examined every city in North America that has developed a new downtown arena and, in each case, there's been growth to the city core as a result.

He says there's no reason why Sudbury should be any different.

“We look at this as an investment in the downtown that should end up paying dividends back to our members,” he said. “At the same time, it makes sense for the downtown to invest if it's the downtown business owner who's going to benefit directly from this.

“So, we're going to put some skin in the game and make it a little bit more palatable for the taxpayer.”

This financial commitment “should be pretty significant and tangible,” says MacIntyre.

“We had the intent of doing this for the last little while, but we needed to go through our membership process,” he says. “We wanted to make sure we were doing that in the correct order.”

While the consultant's report isn't due for another two weeks, MacIntyre believes it has likely been finalized at this point.

Downtown Sudbury will now put their proposed investment to a vote of their membership in advance of council receiving that report and making their final decision.

MacIntyre recently sat down with Sudbury.com managing editor Mark Gentili to outline his case for a downtown event centre. Watch the latest installment in our “Tea with the Editor” video series.

About the Author: Patrick Demers