Read the joint statement from Jim Gordon and Ken Boshcoff calling for more autonomy for the Northern Ontario School of Medicine
Apr 7, 2021 1:00 PM By: Gary Rinne 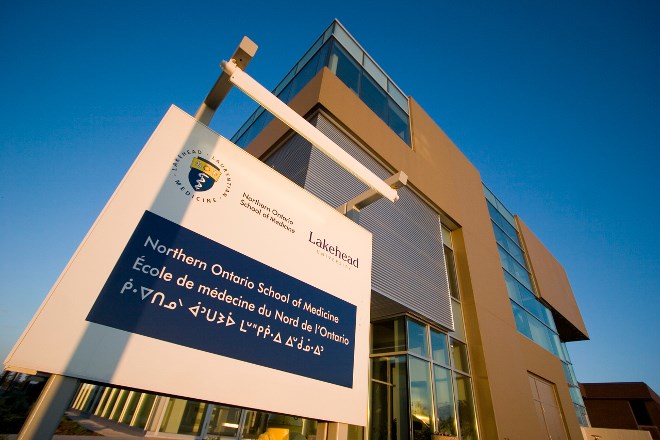 THUNDER BAY — Former mayors of Thunder Bay and Sudbury are calling on the Ontario government to come to the aid of the Northern Ontario School of Medicine.

Ken Boshcoff and Jim Gordon say they are "gravely concerned" about the sustainability of NOSM in light of Laurentian University's financial struggles.

One of the things they want the government to consider is to give NOSM degree-granting status in the wake of Laurentian filing for creditor protection in February.

Laurentian and Lakehead Universities co-host NOSM, with campuses at each location.

In a statement issued jointly on Tuesday with Angele Brunelle, executive-director of L'Accueil francophone de Thunder Bay, the ex-mayors said the government needs to protect NOSM and ensure it continues to thrive.

Boshcoff noted that he, Gordon and Brunelle were all strong proponents of the establishment of a medical school for Northern Ontario.

Their statement said that when the school was founded 16 years ago, "None of us would have predicted this situation ... but we cannot sit idle watching a critical health-care strategy be derailed because [NOSM] is not truly autonomous."

They said NOSM was established as a stand-alone legal entity, develops its own curriculum, is accountable for its own accreditation, and recruits its own faculty and students.

However, it still relies on Laurentian and Lakehead to grant its degrees.

"Basically, if I donate now to NOSM, it goes in the bank account managed by Laurentian," Boschoff said. "We can't raise money independently. It goes to Laurentian's bank account. If they become insolvent, it will be wholesale jeopardy and chaos for fundraising, scholarships, securing the number of students that we do."

Boshcoff said he, Gordon and Brunelle only want to ensure the school is stable and sustainable, and that people continue to donate and support it.

Granting NOSM degree-granting status, he said, could address the problem by allowing the medical school to control its own finances, instead of having them managed by Laurentian.

Gordon called the financial crisis at Laurentian "an absolute scandal."

Referring to the university, he said "You want these people to continue telling our medical school what to do? Because the only thing they do for us is to give a doctor a piece of paper. We do all the rest."

Gordon added "I'm telling the government they should step up and provide us with the means to continue standing on our own feet, but better than that, to be able to raise money and do things the way we should."

He said he knows what he's talking about because he spent two years lobbying for the medical school, and was then given the task of developing its business plan.

Dougall Media requested comment for this story from NOSM's current dean, Sarita Verma, but no statement has been issued as yet.

Read the full text of the retired politicians' statement  below.

The Northern Ontario School of Medicine (NOSM) was established as a solution to the doctor shortage in the North. It was set up as a stand-alone legal entity and maintains independent finances, administration, and its own Board of Directors.

Yet, this proven strategy still relies on Laurentian University and Lakehead University to grant its degrees.

In light of what is happening at Laurentian University, why isn’t the government taking measures to protect NOSM and ensure that it continues to thrive as an independent, viable medical school in the North?

As champions in establishing NOSM, we recall the momentum across the entirety of the North to come together and build a solution to healthcare disparities from which future generations would benefit.

There was an emergence of widespread political and Indigenous organization support for the notion of creating the new medical school. Since this time, NOSM has developed partnerships with over 90 communities in Northern Ontario and is an award-winning distributed learning model that connects our vast region.

It has produced 714 MDs and 579 medical residents who have completed NOSM programs with more than half of these healthcare professionals practicing in the North.

NOSM develops its own curriculum, is accountable for its own accreditation, has its own faculty, recruits its own students – by all counts, NOSM is our medical university for the North.

So why is its fate limited by the formality of its construct?

None of us would have predicted this situation when NOSM was founded 16 years ago, but we cannot sit idle watching a critical health care strategy be derailed because it is not truly autonomous.

We know that the government must recognize the positive impact NOSM has had across Northern Ontario. We call upon the government to step in and grant NOSM university status so it may thrive in its social accountability mandate and address the critical health disparities in the North.

Jim Gordon is both the former mayor of the City of Greater Sudbury, MPP for Sudbury and Minister of Government Services. Gordon served as the former chair of the Implementation Management Committee, which provided the business and budget plan to set up NOSM. In

2014, Gordon was named a Member of the Order of Canada.

Angèle Brunelle serves as the executive director for L'Accueil francophone de Thunder Bay. She has dedicated her life to promoting northwest Ontario's Francophone community, and advocating for Francophone rights in the health and education sectors.