Francophone group actually asking council for permission to use land where centre is being built to secure $7.5M line of credit
Sep 5, 2019 9:00 AM By: Darren MacDonald 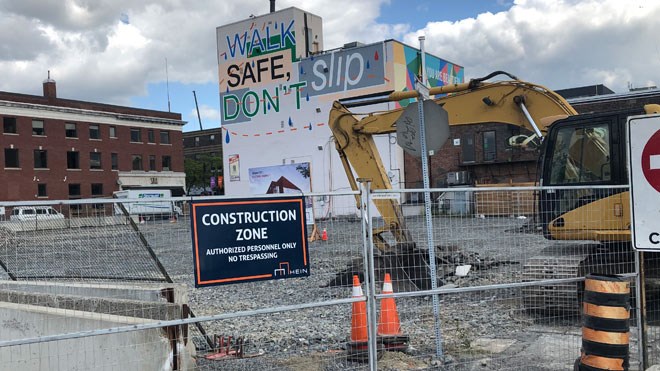 The site of the future Place des Arts is seen here in late August of this year. (File)

Place des Arts is not asking for more City of Greater Sudbury money for the $30 million project, says a spokesperson for the project.

Regarding a report headed to city council next week, Martin Lajeunesse said Wednesday what they are looking for is the city's permission to use the downtown property where the centre is being built as security for a $7.5 million line of credit to draw on during construction.

“It's a tool for cash flow management during the construction,” Lajeunesse said.

While funding for the project is in place, he said a certain percentage of money from upper levels of government is held back until they reach certain construction milestones.

“Not all the percentages are the same — different funders have different criteria,” Lajeunesse said.

While a reasonable measure, he said it makes it harder to pay for construction as they go along, making the line of credit necessary for the project to run smoothly. At issue now, Lajeunesse said, is the fact the city didn't transfer ownership of the property to Place des Arts, opting instead for a 99-year, rent-free lease.

“They determined that, based on the city's long-term interests,” he said. “So the city is committing to be a long-term partner for the project ... but because we're not the bona fide owners of the land, we can't we can't offer up the land to the bank as a guarantee for the line of credit.”

The requirement to use the land as surety emerged during negotiations with the bank, Lajeunesse said, and city staff determined they needed to ensure council was on board with the plan.

“And when staff and the lawyers at the city made that determination we said, OK, well, let's make it happen.”

Councillors may be particularly sensitive to such issues after last month, when they were forced to give the Canadian Mental Health Association a $2.2 million loan to complete a homeless shelter because officials there started building before they had the money in place.

In this case, Lajeunesse said the funding is in place and Place des Arts will be built, regardless of what city council decides Sept. 10. But without the loan guarantee, construction would stall as the milestones are reached and more money is disbursed.

“The alternative is to have a start and stop schedule,” he said. “We have to submit those invoices to the funders as we reach certain milestones, then start up again until we reach another milestone. That's not the right way to manage a construction project.”

Greater Sudbury is giving $5 million for construction costs, the 99-year lease, as well as about $150,000 a year in operating costs. The remaining money is from the provincial and federal governments, and fundraising by the centre itself.

“To date, all public funding sources have been confirmed, and (Place des Arts) has also reached its first goals for securing private donations, as well,” a staff report on the matter says. “Place des Arts have advised that the line of credit, which will be secured by mortgage, will be used for construction only, and not for ongoing operations.”

In a worst-case scenario, the report says, and the Place des Arts can't pay its bills, the bank could take over and become the tenant of the property, or sell rights to the lease to another group.