Downtown arts and cultural centre made some changes to allow for better video streaming throughout the building
Jan 26, 2021 12:00 PM By: Jenny Lamothe, Local Journalism Initiative Reporter 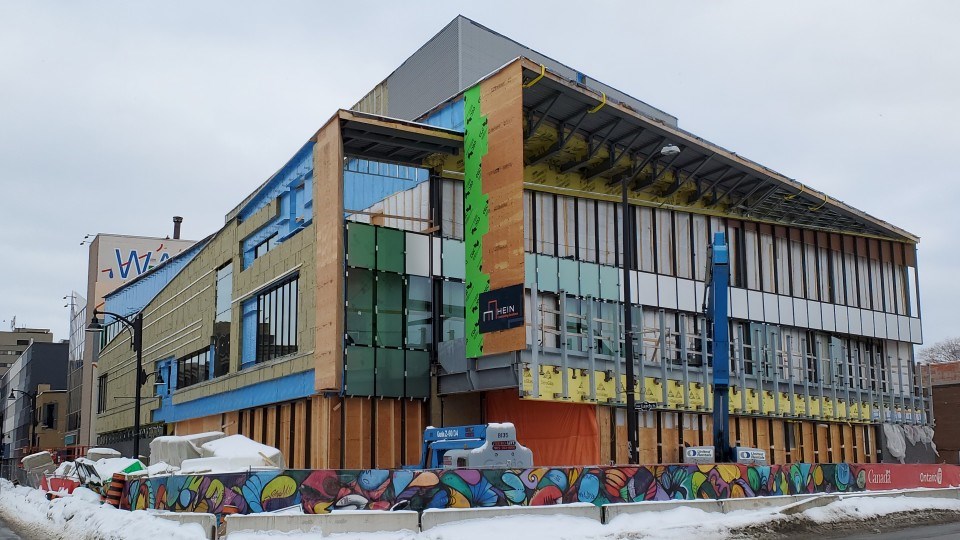 Construction on Place des Arts began in earnest, then a pandemic set back. Work resumes once again, then a second lockdown — then the announcement of a sort-of third lockdown. The construction was supposed to continue, but then everything was shut down once again last week, with the building work ceasing on Friday.

But then Monday it started again. There was an amendment to the legislation.

It’s just another part of the journey, says Léo Therrien, executive director of the new Francophone arts and culture centre in downtown Sudbury.

“The construction is expected to be done at the end of the summer, give or take, and again COVID willing,” said Therrien. “And then our hope is to open later in the fall. Even once the work is finished, everyone has to move in, we have to test all the equipment, you have to do a few shows, too.”

But he’s pleased this timeline should coincide with the vaccination process in Sudbury. “I think everyone will be ready to get back to shows,” he said.

It is also this specific, pandemic-related journey that has revealed an interesting way for the seven organisations behind ROCS (Regroupement des organismes culturels de Sudbury) to offer planning and programming that is not only accessible in the pandemic world, but in the post-pandemic world as well: streaming.

“But we can also Zoom it, stream it externally, too, for conferences, for performances, and so on.”

Whether you love a live show, or your life is more conducive to enjoying it in your pyjamas, there will be options for you.

There will even be recordings, something in the works for La Nuit sur l'étang music festival.

“Right now, they're planning the shows in March,” said Therrien, “But they might be able to get only 50 people right now because of COVID. So, their plan is to have various cameras and record the whole show and sell it later on at another date – present it as a recorded show.”

And because of the occasional pause in the construction, there is the opportunity to consider these aspects: when you can’t build, you have the advantage of time while you work out the kinks of closed-circuit television. Silver Linings, as they say.

“It's the right time for us to put the equipment in place because the walls aren't done yet. It would be too hard to do it if it was all finished,” said Therrien. “That's one of the only bonuses from COVID, is that we were able to adapt.”

But also, they are not open. That means they are not bringing in revenue as of yet. Still, that may again be fortuitous (to be generous with the interpretation). Therrien said that while they wish the building was finished, it also prevented them from having to cancel or postpone.

“We didn't have to stop any shows because we didn't have any shows planned,” he said. “So many of our partners had to cancel their season, then restart it and cancel it again. And it's been that nightmare for them.”

He said that they hope the opening of the Place des arts will allow community arts and culture groups — both Anglophone and Francophone — to come together and pool resources, to use the knowledge and experience from every corner of the city to create programming to enrich Francophone culture and, by extension, Sudbury culture, as well as offer a home to Anglophone groups, like YES Theatre, which is currently in negotiations with the Place des arts team.

There will not only be the headquarters of the seven founding Francophone organisations, as well as a gift shop, bookstore, bistro and multi-purpose studio space, but also a grand theatre and office space and rehearsal space.

And there has never been a better time for art, said Therrien. Movies, television, books, puzzles, art galleries tours and musicals on Zoom — you name the medium, the world consumed content on it — and he’s hopeful this trend will continue.

“Art and culture is healthy to our wellbeing, the health of ourselves,” said Therrien. “That’s why a place like this is essential to our community and to everyone in it.”

Jenny Lamothe is a Local Journalism Reporter at Sudbury.com, covering issues in the Black, immigrant and Francophone communities. She is also a freelance writer and voice actor.