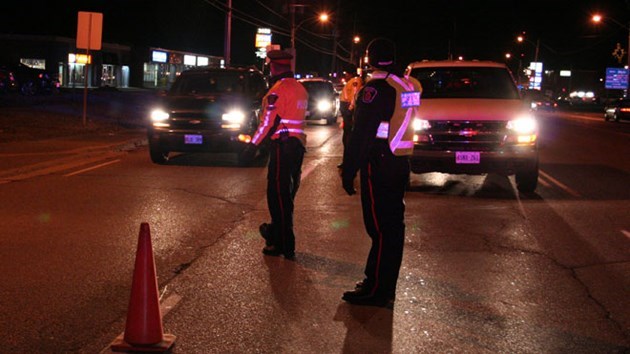 A 22 year-old man has been charged with careless driving after evading a St. Patrick's Day spot check March 17.

According to a release, the Greater Sudbury Police Traffic Management Unit was conducting a R.I.D.E. (Reducing Impaired Driving Everywhere) check on Bancroft Drive Friday night when an approaching driver made a "dangerous u-turn maneuver" and sped away in the opposite direction.

Police say the suspect then abandoned his vehicle and fled the area on foot.

The man was located by police at a nearby residence a short time later.

In a separate incident, a driver was charged with impaired driving after nearly hitting a uniformed officer crossing a downtown street.

The GSPS Traffic Management Unit set up two R.I.D.E. checks on Friday night — on Bancroft Drive and on Lloyd Street.

Officers checked a total of 368 vehicles and issued one three-day driver's license suspension, five equipment violations, two charges of driving while under suspension, one breach of a court order and the careless driving charge described above.

No charges of impaired driving were laid at either of these two spot checks and no field sobriety tests were given.

A total of 300 vehicles were checked and one field sobriety test was conducted, but no charges were laid.

GSPS encourages the public to be on the lookout and to call 9-1-1 if they suspect and impaired driver.

About the Author: Patrick Demers