Updated at 1:26 p.m. on March 23 Stagnant ridership and decreasing revenue over the last nine years has prompted the province to sell off the Ontario Northland Transportation Commission.
0
Mar 23, 2012 3:18 PM By: Arron Pickard 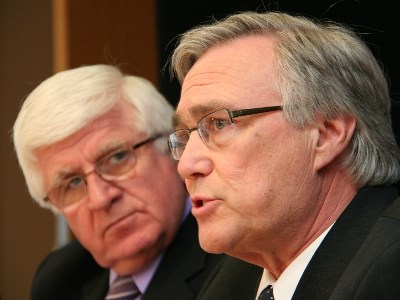 Stagnant ridership and decreasing revenue over the last nine years has prompted the province to sell off the Ontario Northland Transportation Commission.

Government funding has increased 274 per cent from $28 million in 2003 to $103 million this year, Sudbury MPP Rick Bartolucci, Minister of Northern Development and Mines, said. The ONTC has not lived within its allocation in any year since 2003, with the average government subsidy pegged at 61 per cent higher than what was budgeted.

The divestment is taking place as the province strives to balance its budget. It was not a “knee-jerk reaction, but there came a time when the province realized the ONTC model was not producing the desired results. The fact is, while the business line is good, the model is not.”

Sales revenues have declined from $140 million to just more than $100 million. The current subsidy on the Northlander train is $400 per passenger, and no longer affordable, Bartolucci said, in an announcement he called “one of the toughest” his government has had to make.

“After trying diligently without success, since 2003, to help the ONTC become sustainable, financial realities have forced us to make this decision,” Bartolucci said.

There are 966 jobs within the ONTC that could potentially be impacted through divestment, but there is no indication as to what that impact will be.

“It's too early in the process for us to provide details about how many jobs will be lost or gained in what ways,” Bartolucci said, and added there are in excess of 130 people who are able to take retirement packages to offset the impact. “It's also reasonable to expect that many jobs can be maintained under new operators, and the possibility of new jobs being created is not out of the question.”

While the sell-off will impact 11 communities in northeastern Ontario, there will be no immediate change to any ONTC services through the process, he said. In the short term, he wants to ensure workers of the ONTC that it “will be business as usual” while the divestment takes place.

“This isn't going to be done in days or weeks. This is a time-intensive initiative, and it will be business as usual until it's final,” Bartolucci said.

The province started what Bartolucci called “results-based planning” after ministers were appointed following the provincial election, and has been contemplating the divestment of ONTC over the past two to three months.

The ONTC board has been dissolved and a new board has been appointed. It will again be chaired by Ted Hargreaves. It will look at businesses that may be interested in one, two or all of the business lines, Bartolucci said. Paul Goulet will continue to serve as president and CEO.

Hargreaves has chaired the board for the past eight years. The current financial sustainability model is difficult, and “something we aren't able to carry forward into the future.”

“Divestment is not foreclosure,” Hargreaves said. “It's going forward in an orderly fashion of organizing assets and transferring those assets to other operating entities. It's a measurement of a step in hope.”

Pensions will remain whole, labour contracts will be respected and all service relationships and business stakeholder commitments will be met. The ONTC holds hundreds of millions of dollars in assets from service lines to its buildings, Hargreaves said.

The province is looking for new providers for services currently operated by ONTC, and the new commission is looking for a divestment model that will meet the needs of northeastern Ontario, Hargreaves added.

“We're simply working to maintain services in a functional way that is affordable for northeastern Ontario,” he said.

Nickel Belt NDP MPP France Gélinas said selling off the ONTC is “the wrong decision at the wrong time.”

In 2004, Bartolucci fought to save the ONTC, saying that the privatization that had been tried by the Harris government was the wrong way to go, and that the ONTC was a strategic asset that needs to be supported by government, Gélinas said.

“I can't believe years later that he's going down the same path of privatization of the ONTC,” she said, adding the minister “has turned his back” on the message he delivered eight years ago.

Ontario is set to develop the Ring of Fire, and one of the most obvious ways for the government to play a role in ensuring that project benefits the people of Ontario is through transportation, “and who best to move that forward than ONTC,” Gélinas said. “Yet, we're selling it off.

“I fully understand we're in a deficit and that we need to balance the budget, but to do that on the backs of the people of northern Ontario, who will lose this strategic asset, makes no sense.”

In her own riding, there are a lot of “very creative businesses” that rely on the ONTC. Selling it off to the highest bidder cannot come without a “tremendous negative effect” on businesses trying to get back on their feet following the collapse of the forest industry.

Divesting itself of the ONTC is “taking away the opportunity that may allow those hard-hit by the recession to spring back,” she said.

Bartolucci verified that he stood in opposition to the Harris government's termination of ONTC services, and in 2003, he “stood with union presidents in solidarity and said we would do everything we could as a government to make the ONTC a viable entity.”

“I am very proud that no government has tried as hard as our to support the ONTC,” he said.

The province will provide “comprehensive” and “transparent” information as it becomes available, Bartolucci said.

At a press conference this morning, Northern Development and Mines Minister Rick Bartolucci announced that the province has decided that, when it comes to the Ontario Northland Transportation Commission (ONTC), it has had enough.

Framing it as a method of balancing the budget by 2017-18, the province said it plans to wind down the ONTC.

This winding down includes divesting itself of the commission entirely. While the operation of the Polar Bear Express is to be ensured, all rail freight and refurbishment assets, as well as the Ontera telecommunications, will be divested.

The Northlander train between Toronto and Cochrane will be cancelled and replaced with an “enhanced” bus service, while bus services will be tendered to other operators.

The ferry service between Moosonee and Moose Factory will be consolidated with other provincial ferry operators.

“No government in recent memory has worked harder than ours to make the ONTC viable,” Bartolucci said in a media release. “We’ve made significant investments in the ONTC since 2003, but the organization is not on a sustainable financial path. We have a responsibility to find a new solution that both protects essential passenger services and ensures that northerners are getting full value for taxpayer money. Our priority is to invest in areas that matter most to northerners, such as health care, education, northern highways and the Northern Ontario Heritage Fund.”

According to the release, the government increased ONTC funding by 274 per cent since taking office. However, it said the demand for services has stagnated. Also, the current subsidy on the Northlander train is $400 per passenger, and no longer affordable.

Ridership has remained stagnant at about 320,000 rides a year.

A transition board has been appointed to work with current Chairman Ted Hargreaves to begin the divestment of the commission.