Should we let some species go extinct?

Philosopher Ronald Sandler posed a self-admittedly controversial question Nov. 15 while participating in a panel discussion at an international symposium on extinction held at Laurentian University.
Nov 16, 2013 5:39 PM By: Heidi Ulrichsen 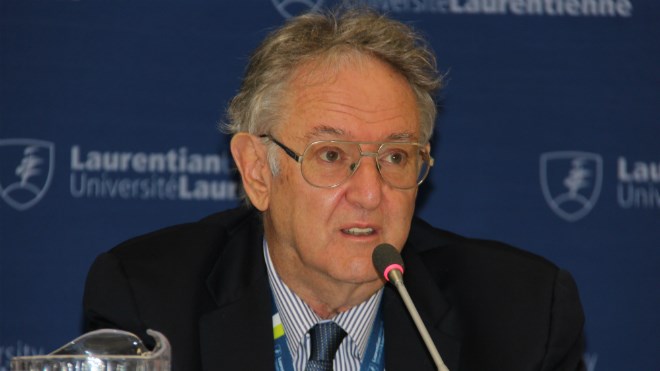 Stuart Pimm, a world leader in the study of present-day extinctions, was one of those who participated in the Thinking Extinction symposium at Laurentian University Nov. 14-16. Photo by Heidi Ulrichsen.
Philosopher Ronald Sandler posed a self-admittedly controversial question Nov. 15 while participating in a panel discussion at an international symposium on extinction held at Laurentian University.

He wonders whether it's always worth saving endangered species, or whether in some cases it would be better to just let them go extinct.

Conservation biologists are moving towards increasingly complex techniques to restore endangered species, including cloning, said Sandler, the director of the Ethics Institute at Northeastern University.

These techniques could have the “significant downsides” of being ecologically risky and very difficult to pull off.

He also wonders if intervening in this way preserves what's valuable about certain species if they're no longer able to live in the wild — a situation which could be coming for the polar bear.

“What do we value about the polar bear?” Sandler asked.

“One is that it's cute — and apparently falsely cuddly-ish.

But another is that they're out there roaming around on the ice, hunting seals — my God that is awesome. It just doesn't do that in the Central Park Zoo.”

Stuart Pimm, a world leader in the study of present-day extinctions, who also participated in the Thinking Extinction symposium, said if scientists were in charge of “triaging” which endangered species to focus on, it would be OK.

The problem is that politicians — not scientists — are making the decisions, and might decide they're not even going to save the species earmarked for conservation efforts, he said.

“We've managed to reduce the projected extinction rates by about three-quarters, which means we're actually getting good at doing this thing called conservation.”

James MacLaurin, a philosopher of biology at the University of Otago in New Zealand, said we already have “selective conservation” because people are more interested in some species than others.

“We don't love creepy-crawlies,” he said. MacLaurin said if he could choose what kind of species he was, he'd choose to be a “charismatic megafauna” in a first-world country like Canada where he'd be at less risk.

Speaking of “charismatic megafauna,” one symposium participant asked the panel why the Canadian government would spend millions to bring panda bears to the Toronto Zoo, when the money would be better spent preserving habitat for other species.

Canadian author and environmentalist Margaret Atwood, who participated in the panel with husband Graeme Gibson, asked “How did that happen? We had pandas forced upon us?”

Gabriela Mastromonaco, the manager of the Toronto Zoo's reproductive sciences programs, said the panda bear situation “was a political deal. You can thank Stephen Harper for that,” she said.

She said she's supposed to be focusing on Canadian species, but is now having to devote time to panda bear reproduction.

However, Mastromonaco said there is value in intervening to ensure endangered species don't become extinct.“As human beings, we kind of caused the problems, so it's a little difficult for us to walk away from it.”

If people want to reintroduce species that have been wiped out in an area because of habitat loss, that effectively means breeding in captivity.

That being said, Mastromonaco said she's not in favour of bringing back long-extinct species such as the wooly mammoth or the sabre-toothed tiger.

Local biologist Franco Mariotti told the panellists that the problem with sacrificing some species is that within a few generations, people won't know what they're missing.

One hundred twenty five years ago — or just five generations back — Sudbury was completely forested and was teeming with animals such as caribou. “Why aren't Sudburians demonstrating in the streets?” he asked. “It's a slippery slope.”