Sudbury's Bio-Mine didn't win the $1M, but may still come out on top 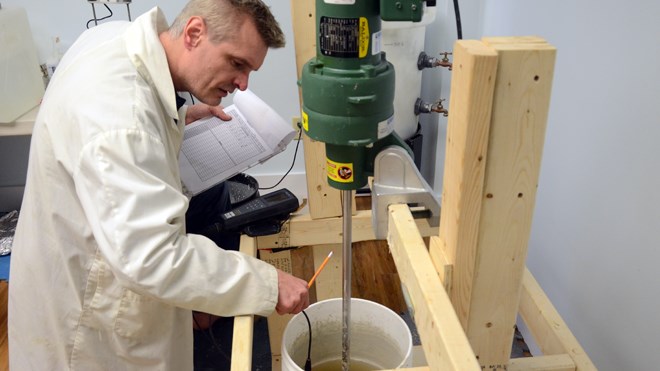 Bio-Mine Ltd. cofounder Kurtis Vanwallegham takes readings from one of the company's experiments in dynamic bio-technology for the mining industry. Photo by Arron Pickard

While Bio-Mine Ltd. wasn't chosen to haggle for the $1-million grand prize in the #DisruptMining competition at the Professional Developers Association of Canada conference on March 5, the company's founders could still walk away with as much as $100,000.

Co-founder and CEO Kurtis Vanwellegham said he will be meeting with judges soon to make a deal for that money. Best-case scenario, Vanwallegham walks away with $100,000. Worst-case scenario, he walks away with nothing for its bio-intelligent organisms that can target metal recovery and remediation efforts in the mining industry. https://www.sudbury.com/local-news/scientists-create-super-soldier-bio-technology-for-mining-industry-551759

“We got into the deal room, that's the big thing,” he said.

Now it's all a typical negotiation with someone who wants to invest, he said. They'll say what they want for their investment, and Vanwellegham will yes or no.

“If we're not willing to give away shares, and they only want shares, then it could very well end right there,” he said.

It was Cementation Canada Inc. that came away with the big prizes from the competition. The North Bay firm (which has an office in Sudbury as well) pitched its injection hoisting technology. Using a combination of existing and proven crushing, pumping and slurry technologies, Cementation has developed a proof of concept model for process injection hoisting that would eliminate the need for mine shaft production hoisting or trucking, by transporting ore to the surface using a pump driven pipeline loop.

Cementation was chosen by judges as a co-winner of the $1-million grand prize, as well as the People's Choice Award as the audience favourite. Winnings for Cementation totaled $650,000.

“It was a great event showcasing just how innovative the mining industry can be and all of us at Cementation are thrilled to have been involved and to have injection hoisting so well received,” said Roy Slack, president of Cementation Canada, in a press release.

During the presentation, Cementation asked for a mine to install and develop a full-scale prototype. By the end of the evening, at least three mining companies expressed interest in working with Cementation to help develop their Injection Hoisting technology, said the press release.

As for the competition itself, Vanwallegham said overall it was amazing, but he was disappointed with his pitch.

“My pitch didn't exactly go the way I wanted it to,” he said. “ I was going along great, and I felt comfortable, but then I ran over my time a little bit. In practice, no one said anything if we ran over. As soon as I went over the time limit, they stopped me, and I didn't get to say everything I wanted.

“It was very tense up there with five minutes to present, and I think that's what caused us to lose out on the chance at the $1 million. But, I think they saw something they liked, so we're going to the deal room.

“The best thing, though, is after the show, five of the top 10 mining companies in the world came to see me, and I have meetings lined up. The exposure has been incredible.”

Now, Vanwallegham said he will hit the road to capitalize on the exposure gained from the #DisruptMining competition. He has made contact with Chinese companies to have his product penetrate other markets around the world, such as Australia and Chile.

“It's a real amazing opportunity, and it all came from this competition,” he said.

He said he's also been asked to present at the Centre for Innovation in Mining expo in Montreal, Que., in April.

#DisruptMining is a global competition sponsored by Integra Gold Corp. and Goldcorp Inc., and designed to showcase individuals, groups and companies that are using exponential technology and disruptive concepts to tackle the vast challenges faced by the mining industry.