In the 1990s and the early 2000s, the Sudbury Neutrino Observatory (SNO), located at the 6,800-foot level of Vale’s Creighton Mine, conducted an experiment to detect solar particles called neutrinos.
May 16, 2012 5:07 PM By: Heidi Ulrichsen 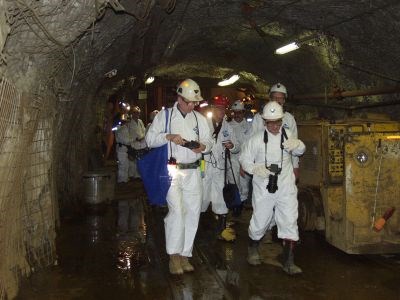 Scientists head into the tunnel that will take them to SNOLAB, a research facility located 6,800 feet below ground. File photo.

In the 1990s and the early 2000s, the Sudbury Neutrino Observatory (SNO), located at the 6,800-foot level of Vale’s Creighton Mine, conducted an experiment to detect solar particles called neutrinos.

After that experiment was completed, work began on SNOLAB in 2004.

The project was aimed at tripling the space in the underground facility to 50,000 square feet, allowing several dark matter and neutrino experiments to be conducted at once.

The $70-million facility is now complete, and its grand opening is being celebrated May 17 with a press conference and a gala dinner for SNOLAB’s staff and project partners.

Northern Life will also participate in a media tour of the facility. Watch video of the tour.

The project was funded by a number of agencies, including the International Joint Venture Program, the Canadian Foundation for Innovation, the Northern Ontario Heritage Fund, the Ontario Research Fund, Vale and FedNor.

Among the projects at SNOLAB are the helium and lead observatory (HALO), which will be used to detect supernovas, and the Chicagoland Observatory for Underground Particle Physics (COUPP), which uses bubble chamber technologies to search for dark matter.

The SNO+ project uses the existing SNO facility to detect neutrinos, but uses linear alkyl benzene instead of heavy water to do so.

It’s necessary to conduct these experiments two kilometres underground to avoid solar radiation, according to Samantha Kuula, the communications officer with SNOLAB.

“By going underground, that two kilometres of rock acts as a filter, and we get rid of all those high-energy particles coming from space,” she said.