OTTAWA — Procurement Minister Anita Anand says that as soon as she knows when the first dose of COVID-19 vaccine will arrive in Canada, she will share that information with Canadians.
Dec 4, 2020 8:27 PM By: Canadian Press 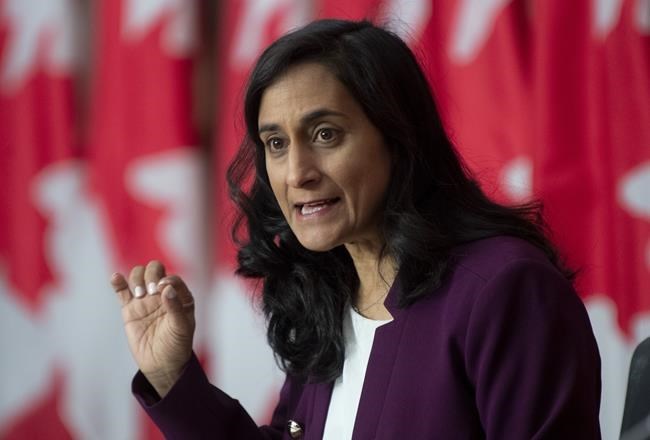 OTTAWA — Procurement Minister Anita Anand says that as soon as she knows when the first dose of COVID-19 vaccine will arrive in Canada, she will share that information with Canadians.

But Anand told The Canadian Press in an interview this week that the original contracts to buy COVID-19 vaccines had to be vague about delivery dates because nobody knew at the time if the vaccines would be successful.

It's only in the last few weeks, when the leading candidates from Pfizer, Moderna and AstraZeneca reported such positive results from their large clinical trials, that the way forward became clear enough for Anand's department to start asking the companies to be more specific about when they can make good on their contracts with Canada.

"We put these contracts in place in order to place Canadians in the best stead possible, of any country in the world, recognizing that we would need to negotiate additional terms such as precise delivery dates, once a vaccine was discovered, and regulatory approval was obtained," she said. "And that is what's happening now."

As Canadians face a pandemic-plagued holiday season and dream that 2021 will not be the anxiety-laden and often tragic disaster that 2020 has proven to be, there is one gleaming hope dangling still just out of reach: a vaccine for COVID-19.

Still, the federal government has yet to answer one big question: When will it get here?

It is not that she doesn't want to tell Canadians when, said Anand. But the complexities of figuring out a specific date are linked to when Health Canada approves the vaccine, and when the vaccine makers can see that Canada is ready to receive and safely distribute the precious doses, some of which have to be stored at temperatures below -70 C.

Those pieces are starting to converge now.

Health Canada officials are days, maybe even hours, away from approving the COVID-19 vaccine from Pfizer and BioNTech for use in Canada.

Canadians got some more information on the logistics from a briefing of federal officials this week, including that Pfizer will ship its vaccine directly to 14 identified receiving sites in provinces. FedEx and Innomar Strategies were contracted Friday to oversee the delivery of other vaccines from a national receiving site to provinces.

The National Advisory Committee on Immunization issued refined guidance Friday for who should get the vaccine first, including long-term care residents and workers, and people over the age of 80.

The materials like syringes, gauze pads and bandages needed to vaccinate millions of people are in place. Ultralow temperature freezers have been purchased and nine new ones have already arrived. Provincial governments are lining up their own task forces.

"We are going to have vaccines in this country, as expeditiously as possible," Anand said.

Conservative Leader Erin O'Toole has been decrying the lack of clarity from the Liberals about the vaccine plan. A week ago he accused the Liberals of only starting to buy vaccines in a panic this summer after a collaboration with China on a vaccine fell apart.

The partnership between the National Research Council and China's CanSino Biologics was announced in May to great fanfare. But the doses to be used in a Canadian clinical trial failed to arrive, when the Chinese government — in the midst of political tensions with Canada — refused to issue an export permit for them.

“I would not have put all our eggs in the basket of China,” O’Toole said Nov. 29, adding the timeline shows it wasn't until that deal fell apart that Canada "started getting serious with Pfizer, Moderna, the other options."

Anand said that is not the case.

She said the CanSino deal fell within Innovation Minister Navdeep Bains' portfolio, not her own, and nothing about the project prevented her from negotiating with other companies.

Her marching orders to negotiate deals with other vaccine makers came weeks earlier. A team of procurement officials in her department was assigned to the file in March, at the same time as those negotiating contracts for medical supplies, personal protective equipment and rapid tests.

In June, the COVID-19 vaccine task force provided a list of vaccines for Canada to pursue. Anand said talks with manufacturers began in early July. The first deal, with Massachusetts biotech firm Moderna, was struck July 24.

Canada was first to sign with Moderna. It signed a contract with Pfizer and BioNTech a week later, on Aug. 1. It was the fourth country to do so, after the United Kingdom, the United States and Japan.

News of trouble on the CanSino deal first appeared in early July when the doses still hadn't been approved for export by China. Canada walked away from the deal at the end of August when it became clear it would not happen.

By then, Canada had deals with four other vaccine companies, including Moderna, Pfizer/BioNTech, Johnson & Johnson, and NovaVax. It added deals with Sanofi/GlaxoSmithKline and AstraZeneca in September and then with Canada's own Medicago the next month.

Anand said Canada approached every contract with a similar goal — to get 20 million doses guaranteed, and options to potentially buy more later on. In all, Canada is paying more than $1 billion to the seven vaccine makers for 194 million doses, even if those vaccines never get beyond the experimental stage.

Another 220 million doses are available if Canada asks for them, a decision that will be made for the vaccines that are proving to be the best. Anand announced Friday another 20 million doses will come to Canada in 2021 from Moderna, for a total of 40 million.

This report by The Canadian Press was first published Dec. 5, 2020.

'Out in the cold:' Rancher's lawyer says Alberta should have consulted on coal policy
Jan 19, 2021 7:00 PM
Comments