Division-leading Wolves take a bite out of Mississauga 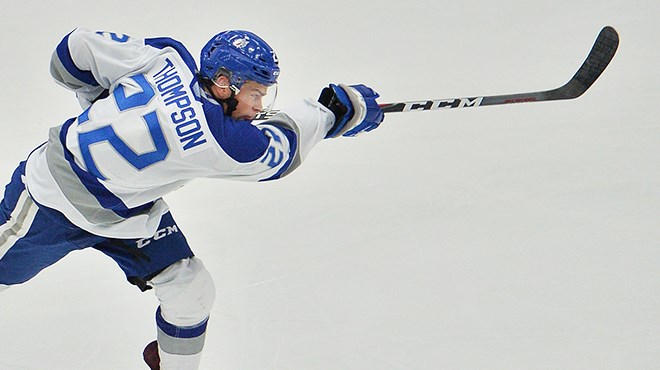 The Sudbury Wolves took a bite out of the Mississauga Steelheads Sunday, using the same shot-heavy approach that has earned them six wins this regular season and the number one spot in the Central Division.

While appearing evenly matched in the first period, the penalty-ridden affair suffered a mid-game stalemate, giving Sudbury the time it needed to find it's footing and claim a 4-2 final against its southern hosts.

Sudbury Wolves' Jack Thompson was named first star in the matchup, delivering his sixth goal of the season with assistance by Chase Stillman and Phil Caron.

The Mississauga Steelheads opened up the scoreboard 10:50 into the first period off a goal by Innisfil-born James Hardie, after several failed shots from both sides of the ice. He was followed shortly thereafter by Florida Panthers prospect Cole Schwindt, who brought the Steelheads' lead up by one with assistance by Hardie and Richard Whittaker.

The Wolves responded four minutes later with a goal by Thompson, but the period was not over yet. With less than three minutes remaining in play, Sudbury's Isaak Phillips cut through the madness to score his second goal of the season off an assist by Emmett Serensits and Wolves' goalie Mitchell Weeks.

Last-minute action brought the teams to an even 2-2 heading into the second period, with shots on goal 10-15 in favour of Mississauga.

Roughhousing, hooking, holding and blindsiding took centre stage in the second period as both teams struggled to find the net. Facing Weeks across the ice was Steelheads' Kai Edmonds, who managed to stop 13 of Sudbury's 21 shots on goal.

The Wolves wasted no time breaking through the stalemate in the third, scoring off their first shot 1:04 into the period. The game-winning goal was delivered by five-season veteran David Levin with assistance by Owen Gilhula and Macauley Carson.

Despite a solid effort by the Steelheads to battle back from their deficit, they couldn't beat Weeks standing tall between the pipes. Wolves' Quinton Byfield sealed the deal at 11:28 with his eighth goal of the season, off an assist by Thompson and Blake Murray.

The game was called at a 4-2 final for Wolves, with final shots on goal 42-34 in favour of Sudbury.

Just one point ahead of southern rivals the Barrie Colts, the Sudbury Wolves sit first in the Central Division with six wins and three losses. The Mississauga Steelheads, on the other hand, are fourth in the five-part riding.