Sudbury official jumps into a position with with East Coast league 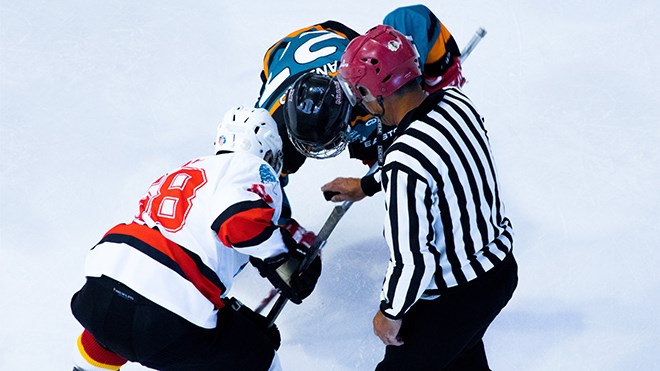 Young local hockey talent are not the only ones looking to make a big jump on the ice this year.

Sudbury official and Lasalle Secondary graduate Kyle Lekun has recently signed on with the ECHL (formerly known as the East Coast Hockey League), as the former Sudbury Wolves' draft pick makes the move from northern Ontario to Greenville, South Carolina next month.

"It was either stay in Canada and officiate part-time, whenever I can, or move to do it full-time and give it a legit shot," stated the 27 year-old, shortly after working the NHL vs Docs charity game last weekend.

"It's what I want to do. I wanted to give myself the best shot possible to do it."

Beginning his pathway as an official some six years ago, Lekun advanced quickly, working as a linesman in the OHL (Ontario Hockey League) just a few years later. In recent years, he has focused more heavily on progressing as a referee, assigned to games in the NOJHL, Great North Midget League and the OUA, as well as working some high end provincial and national playdowns.

"Refereeing is what I think I'm better at anyways."

Much like the players on the ice, officials need to benefit from someone who believes in their ability, with former NHL linesman Dan McCourt providing a helping hand in landing Lekun a shot at the NHL combines a couple of years ago.

And so the Sudbury Minor Hockey Association product begins the process of transitioning to the pros, a somewhat different landscape, beyond simply reverting back to a three-man officiating crew.

"It's all about game management, knowing when to call a penalty and when to let something go," said Lekun. "If it's a 50/50 play, you need to ask yourself: did they keep control of the puck? Did they get a scoring chance out of it? All of that comes in as factors."

"If you call a chintzy hook in the first, then that's your standard and you have to call it the rest of the game. It's not like it was back in the day, when you just put the whistles away late in the game. If there's a penalty, you've got to call it."

For Kyle Lekun, this is a big deal, dealing with adjustments both on the ice and off. "This will be my first time living on my own, so that will be a change," he said.

"I do like travelling, so that should be fun, seeing different parts of the country. I've been down south a bit, but not in that area. And there's a lot of golf courses too."