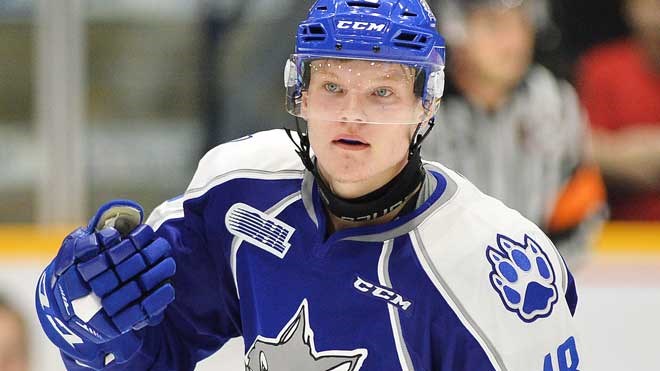 Macauley Carson will break the franchise record of 301 games played in a Wolves uniform this Wednesday when the Wolves take on the Barrie Colts. (File)

The Sudbury Wolves are looking to build off a successful weekend where they picked up five of a possible six points against Central Division rivals.

The push for the playoff continues this Friday at 7 p.m., when the Wolves get set to host the Sault Ste. Marie Greyhounds in the final game of the Bell Challenge Cup before the Wolves wrap up the weekend as they host the Kingston Frontenacs.

The Wolves continue to lead the Central Division with 66 points and hold the lead by six points over the Barrie Colts.

The Greyhounds sit ninth in the Western Conference, three points back of the Erie Otters for the eighth and final playoff spot. Greyhounds forward, 19-year-old Zack Trott leads the Greyhounds with 61 points in 59 games.

Friday’s game is sponsored by Canada Life who will be on-hand with prizes and giveaways for lucky fans.

The Kingston Frontenacs are making their one and only appearance of the season in the Nickel City this Sunday. The Frontenacs are also battling for the eighth and final playoff position in the Eastern Conference and are led by first year forward Shane Wright who has 66 points in 55 games.

Sunday’s game is sponsored by P & M Kouzzina in support of Epilepsy Awareness. Fans are encouraged to wear purple to show their support. P & M Kouzzina will be on-hand with lots of prizes and giveaways throughout the game.

Fans are encouraged to visit their table in the lower lobby to pick up their paper airplane for the airplane toss during the second intermission.

There are only four regular season home games left so don’t miss out. Tickets for both games are still available at greatersudbury.ca/tickets and sudburywolves.com.

Prior to this weekend’s games, the Wolves will travel down Highway 69/400 to visit the Barrie Colts for the final time this season on Thursday. Game time is 7:30 p.m.

In this matchup, Wolves overager Macauley Carson will break the franchise record of 301 games played in a Wolves uniform. Fans can tune into the live play-by-play on CKLU 96.7 and mixlr.com/sudburywolves.

SWSE will also be hosting a watch party this Thursday at Shoeless Joes as the Wolves visit the Colts (7:30 p.m. start) and the Sudbury Five play the Halifax Hurricanes (6 p.m. start).

The fun begins at 5:30 p.m. as there will be prizes and giveaways.