When Bartolucci announced his retirement in January 2013, he left a strong campaign narrative for whoever succeeded him. Voters showed they wanted change, but it's not like the former cabinet minister scorched the Earth on his way out the door.
Apr 2, 2014 4:54 PM By: Darren MacDonald 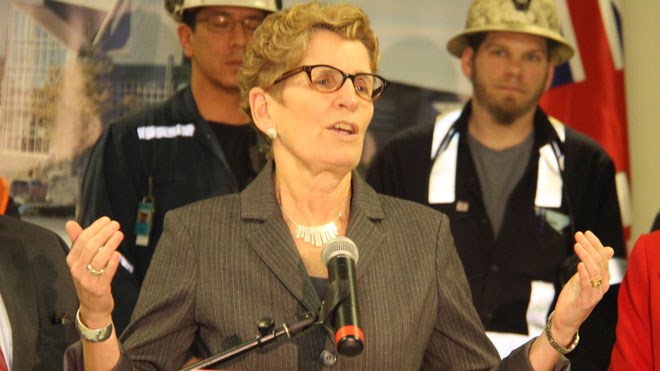 According to media reports, a controversial documentary about Premier Kathleen Wynne will be broadcast on CTV’s W5 next month. File photo.
When Bartolucci announced his retirement in January 2013, he left a strong campaign narrative for whoever succeeded him. Voters showed they wanted change, but it's not like the former cabinet minister scorched the Earth on his way out the door.

Cliffs Natural Resources was preparing to build its billion-dollar chromite refinery in Capreol; money-losing Ontario Northland was going to be sold; and, the Ontario Lottery and Gaming modernization plan was going to add significant revenue to the province – and to cities that wanted casinos.

Not that everyone loved the plan, but at least those elements of the Drummond Report offered a path toward balancing the books. Yes, there were tough choices, but governments willing to make tough choices used to get elected in Ontario.

But modern politics, more than ever before, is hyper focused on demographics and blocs and message. Voters are not individuals so much as we are demographics who will vote for parties who like what we like, hate what we hate. When Kathleen Wynne took over from Dalton McGuinty, she started unravelling policies that were killing the Liberals among certain demographics.

The OLG plan, for example, was killing them in rural Ontario, where ending the slots at racetracks program had a much bigger impact than, say, Toronto. So racetracks have been spared, sort of, and the OLG insists the casino plan is still moving forward, but really, it's dead. Cliffs has suspended all work in Ontario, even as the Liberals keep unveiling plans on how they plan to make decisions at some point in the future. The ONTC may not be sold, after all. And, I guess, chronic budget deficits are no longer a problem.

I'm not saying these policies were visionary, but at least someone was saying that we have to make tough decisions if we want a better future. Today, instead of blue books and red books, we have policy papers crafted on the fly to appease voting blocs.

Tim Hudak's Conservatives, for example, bill themselves as fiscal conservatives, even as they promise everyone everything and populate their website with white papers that resonate with no one.

The NDP and Andrea Horwath, ironically, say they will bring the government down if it raises taxes on middle-income earners. We know they want to spend a lot of money, and the Liberals are poaching their policy ideas, but who's going to pay for all of it? Don't worry, all three parties seem to be saying, we'll hold the line on taxes, balance the books and not cut any programs that you like. Trust us.

Which brings us to the battle to name a candidate in Sudbury. The riding association tried, for months and months, to get someone to run to replace Bartolucci. And when two attractive, if inexperienced, candidates finally stepped forward – engineer Elise Idnani and businessman Andrew Olivier – you would expect high fives all around.

But no. Just as Wynne's government fumbled the Sudbury file on the big issues, it appears they also want to micromanage the succession process to ensure it's a mess, as well.

I guess losing the refinery, casino revenue and any semblance of appearing to be fiscally responsible wasn't enough. Now they appear intent on either foisting someone on the local riding association, or waiting until the last minute before allowing local Liberals the privilege of electing their candidate.

The gas plant scandal won't go away. The Ring of Fire is frozen. Hydro rates are soaring. Municipalities are starved for funds. The province is bleeding money. And all of this is top of mind for voters just as the Liberals head into an election campaign.

All of which raises two questions: why would anyone want the nomination in Sudbury? And, if I'm the candidate, how do you sell voters on a premier who has been tone deaf – at best – when it comes to the Nickel City?