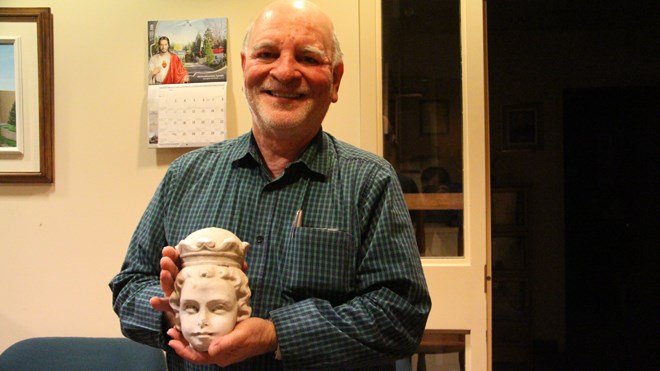 Father Gérald Lajeunesse holds the original head from a baby Jesus statue that had been stolen from Ste. Anne des Pins church nearly a year ago. Photo: Matt Durnan.

The original head from a baby Jesus statue at Ste. Anne des Pins church has been returned to its rightful owners.

On Friday evening, Father Gérald Lajeunesse was paid a visit at the church by a woman who did not wish to be identified and she was in possession of the stone head that had been stolen nearly a year ago.

The statue and the church became the centre of a social media frenzy earlier this week when photos of the statue's temporary replacement head went viral.

In the wake of the whirlwind, Father Gérald said in an interview with Sudbury.com that he was sure something good would come from all of it, and lo and behold, the statue's original head was returned that same evening.

"The woman who had it saw all of the buzz going around about it, and she had the head in her office since August," said Lajeunesse. "Once she saw all of the stories circulation she put it together that this must be from the same statue."

The woman first came to the church to see if her suspicions were true.

"She brought it and tried fitting it on to the statue and it fit to a tee," said Lajeunesse.

The church will now go about reattaching the original head to the statue, after some minor alterations are made. The current head has a small metal pin in it to fasten into the body of the statue.

Lajeunesse says that they will put a larger pin in this time, as well as look into bringing in a professional to smooth out any imperfections.

"Perhaps someone who works on headstones or something like that," said Lajeunesse.

"It's a happy ending to pretty crazy week, it just goes to show that sometimes the Internet works in your favour."