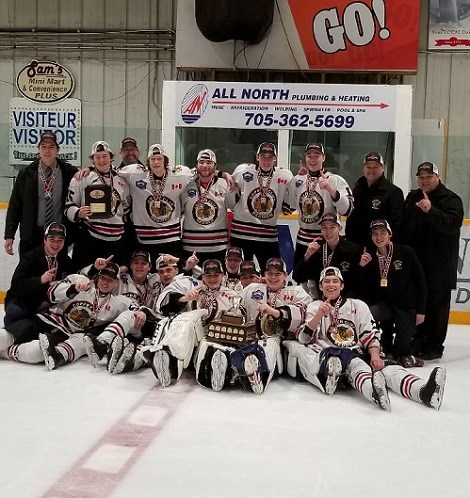 Maybe it was the slap in the face that the Copper Cliff Midget "AA" Redmen sorely needed.

After not losing a single game in Nickel District Minor Hockey League regular season play this year, the 26-0-2 Redmen found themselves trailing their best of five leagues final with the Sudbury Minor Midget "AA" Wolves 2-0, beaten 3-2 and 3-1 in games one and two.

The Copper Cliff dominance that ensued, however, was awfully impressive.

Three straight victories to capture the Jim Conners Trophy, all without surrendering a single goal against - 3-0, 4-0 and 4-0. A three-goal second-period outburst last week at the Gerry McCrory Countryside Sports Complex capped off the comeback, as Brennan Charbonneau, Chase Kanasawe, Noah Lagrandeur and Lindon Shanks scored in support of netminder Kam McCue.

"I think it helped to make us think that we are all human and we're going to make mistakes, that we have to go out there and try every game, that it's not just going to be given to us," noted 17-year-old Copper Cliff blueliner Alex Barry. "It was a good wake-up call."

Since falling behind two-love, all the Midget Redmen have done is reel off five straight wins to capture a NOHA championship in Hearst two weeks ago, before rallying all the way back to claim their league hardware as well.

"Those guys really came out hard, so we knew right at the beginning of the series that we shouldn't take them lightly," said long-time Copper Cliff mainstay Nathan Stagg. "I think it was just the mental preparation that allowed us to be really keen on defense and not make those mistakes."

Despite posting far and away the division's best goals against average, the Redmen still felt strongly that a third straight shutout was relevant. "I think it was pretty important," said Stagg. "I think we wanted to do that, if only to show that we can play defensively, we can keep them from scoring. It was a pride thing."

The Copper Cliff clan will travel to North Toronto from April 13-15, with the Ontario Hockey Federation championships right across the province all taking place that weekend.