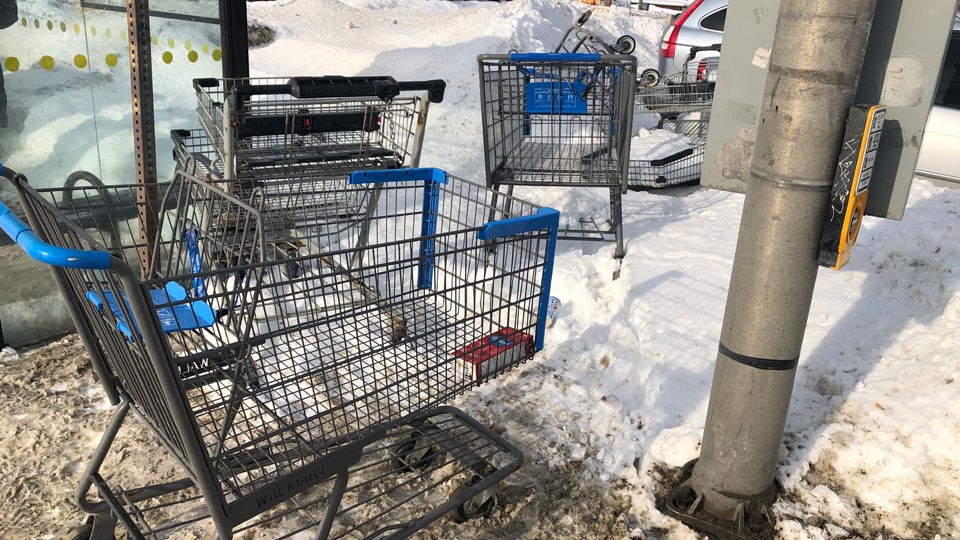 Greater Sudbury councillors voted last week to have staff prepare a report on a shopping cart bylaw, similar to the one in use in Ottawa.

When that city's bylaw to regulate shopping carts came into effect in January 2014, nearly 600 of the stray carts were rounded up in 60 days.

Not only did it send a message to local retailers, it netted the city $30,000 in fines, charging stores a $53 per cart "storage fee" that had to be paid if they wanted the property returned.

Other cities have followed suit, such as Mississauga, where not only business owners, but people who remove the carts from the store property can be fined.

Closer to home, Sault Ste. Marie is considering a similar bylaw, for the same reasons as Sudbury: they are a nuisance and a potential safety hazard.

"Some of our merchants who have shopping carts have been diligent in picking them up — some more than others," said Ward 12 Coun. Joscelyne Landry-Altmann, who introduced the shopping cart resolution Jan. 21.

Landry-Altmann said the abandoned carts are a particular problem in her ward, where they are sometimes piled up on sidewalks or snowbanks, teetering on the edge and threatening to fall into the street.

"They teeter on the snowbanks, then they end up on the road," she said. "Anybody driving by ... these things can just come flying at you."

Councillors debated the issue in 2011 and 2012, eventually opting for education and working with local businesses to try and deal with the problem.

Since then, she said Ottawa has had great success with its bylaw, and have forwarded all the details of how it works.

"So we don't have to reinvent the wheel," Landry-Altmann said. "Let's get on with this. This is the time when it's the worst."

Locally, the Real Canadian Superstore on Lasalle Boulevard has implemented a coin system, where shoppers insert a loonie to access the cart and have the money returned when they return the cart.

Walmart tried a similar move in April 2016, only to abandon it a few months later following an uproar from shoppers.

Retailers don't like the bylaws, because they feel they are being punished for a crime someone else commits.

“Shopping carts are expensive and are valuable property for retailers, whose customers rely on them for convenience,” David Wilkes, senior vice-president at the Retail Council of Canada, said in 2016 in reaction to the Ottawa bylaw.

“Slapping retailers with fines when people walk off with their carts is like punishing people who have had their bike stolen ... It’s unfair and it makes no sense.”

But Landry-Altmann said the emphasis in Sudbury should be to work with retailers first, and only move to enforcement as a last options.

Some merchants have tried to prevent theft, she said, installing magnetic strips on the carts to prevent them from leaving the premises. But they don't work well in the winter because ice covers the magnet.

The carts are expensive, Landry-Altmann said, so businesses also want to find solutions.

"I'm confident through a good policy we will be very successful."

The staff report is due by April 21.